Holland had earlier replaced the injured left-arm spinner Stephen O'Keefe, who had to fly back home due to a hamstring strain.

Australia will be handing out debut to Jon Holland, after the rookie spinner was named in the playing XI for the touring side a day before the start of the second Test against Sri Lanka at Galle. Holland had earlier replaced the injured left-arm spinner Stephen O’Keefe, who had to fly back home due to a hamstring strain that put him in trouble during the first Test at Pallekele last week. The Australians will be under pressure going into this Test, as their superb record of not having lost any series to Sri Lanka in the last 17 years will be at stake. Australia had lost the first Test by 106 runs, and they will be under a lot of pressure going into this Test.

According to AFP, Australian coach Darren Lehmann has already acknowledged that the surface on Sri Lanka’s southwestern coast is likely to turn from the outset and benefit the hosts’ spin-laden line-up. “I think it’ll still spin from day one, but it just is what it is,” Lehmann said in the aftermath of Pallekele, a match in which the left-arm wrist spinner Lakshan Sandakan also bagged seven wickets on his debut.

“He’s tall, he’s got good shape on the ball, he bowls at a decent pace. I’m sure he’ll have success here,” said Lehmann of the 29-year-old Holland, from Victoria.

Herath took 10 wickets in his last Test outing in Galle, against the West Indies in November. He also ran through India’s powerful batting line-up three months earlier when he took a match-winning 7 for 48 in the second innings. Sri Lankan skipper Angelo Mathews said the 38-year-old Herath had once again “proved his brilliance” in the first Test which also featured a superb 176 by Kusal Mendis in the second innings.

Mendis’s maiden Test hundred could not mask the fragility of the Sri Lankan batting line-up, as no other batsman passed 50. “This is a very good opportunity for us,” said skipper Mathews. “We are ranked number seven in the ICC rankings and Australia are number one. We need to play well in Galle to seal the series,” he warned.

Australia are expected to stick to the same batting line-up but will need their top order to fire after everyone bar Smith failed to pass 50. Adam Vogues, Joe Burns and Mitchell Marsh all failed to convert starts as Australia squandered an 86-run first innings lead to lose the match by 106 runs.

Vice-captain David Warner — back after six weeks out with a broken finger — registered scores of nought and one. Australia’s last outing to the sub-continent saw them lose all four Tests against India in 2013 and they also lost both matches when Pakistan hosted them for a two-Test series in 2014 in the Gulf.

“We have got to find our plans and find ways to play in these conditions… (We) have to turn it around quickly,” said Smith. 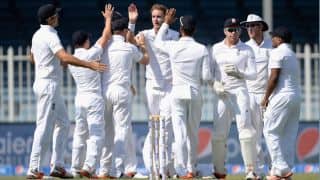 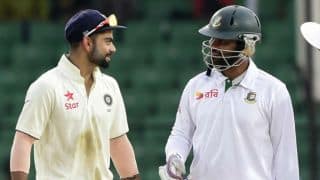 India vs Bangladesh one-off Test moved to next year; to be played from February 8-12, 2017!