Australia are brimming with confidence and would like to maintain momentum. Meanwhile, Sri Lanka will be eager to start afresh and earn their first win of the tournament.

Australia Women commenced their title defence in style by dominating their ICC Women s World Cup opener against West Indies, courtesy an easy, 8-wicket win. Nicole Bolton was on a roll slamming an unbeaten 107 in pursuit of 205 to take her side home. Sri Lanka, on the other hand, found no luck as New Zealand walked past them riding on a sublime century by skipper Suzie Bates, albeit Holly Huddleston ran through their batting line-up. Australia were on top in all departments against the Caribbean women. Sri Lanka, however, were unable to convert their starts into a score big. These two teams will now face at Bristol.

For Australia, it was not just their batting unit that left the opposition bruised. Their bowlers Ellyse Perry, Jess Jonassen and Kristen Beams complimented their batters and exhibited a disciplined show. Sri Lanka, who raised the bar after splendid performances from 2013 World Cup till early 2014, found themselves languishing at the bottom of ODI rankings at No. 8, following a disappointing performance in Women s Championship. However, they found their lost mojo earning the No. 3 spot during the World Cup Qualifiers, in their own backyard.

Australia are brimming with confidence and would like to maintain the momentum. Meanwhile, Sri Lanka will be eager to start afresh and earn their first win of the tournament.

Meg had surprised many during the first match opting for three front-line spinners. Of course, the tracks, like we usually witness in English conditions, did not have much for the pacers in the Champions Trophy 2017 and that the flat tracks offered some turn (not threatening though). In addition, if the tracks are slow and low, the batters will have a tough time easing the ball through the gaps. However, Sri Lanka, a subcontinent nation, have good players of spin. As a result, it will be interesting if Meg dishes out a similar strategy or goes for an extra pacer instead.

Sri Lanka boast of spinners in their camp as well. They will try to trap the Australian batters in spin to restrict the carnage.

Jess two-wicket haul against West Indies is certain to give her another game on Thursday. Elyse Villani proved to be expensive. However, her contribution with the bat cannot be ignored. She scored a brilliant 137-run knock in the opening warm-up encounter against West Indies. Sarah, who was part of the warm-ups against South Africa and Pakistan, was also an instant hit with 5 wickets in the practice games. Hence, Lanning would have an eye on Sarah as well.

With aggressive openers and abundance of all-rounders in Nicole, Beth Mooney, Meg, Ellyse Perry, Villani and Alyssa Healy, Australia would be itching to go all out against the underdogs Sri Lanka.

Sri Lanka eager for a revamp

Sri Lanka are struggling with themselves. Chamari Atapattu played a lone battle of 53 as the subcontinental side slumped to 188 versus New Zealand. With the ball, Chandima Gunaratne was the lone wicket-taker.

Sri Lanka will bank on their experienced batters in Shashikala and Chamari. The islanders will also seek help from Eshani Lokusuriyage with both bat and ball. She would be expected to initiate regular breakthroughs and also play a useful knock with the willow. She had proved her mettle by scoring fine fifties versus India and England in World Cup 2013.

Chamari Polgampola was also instrumental along with Atapattu to keep the momentum going after losing opener Nipuni Hansika early against New Zealand. With some push from the middle order, which comprises of Prasadani Weerakkody and Dilani Manodara, Sri Lanka can still battle the odds and go the distance. 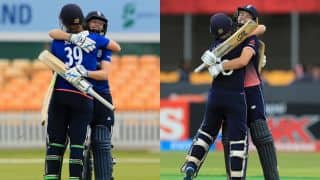