Rain has also doused Australia's hope for a clean sweep in the series.

Rain appears to have scuttled Australia‘s hopes of sweeping their series 3-0 over the West Indies after a third-day wash-out in the third and final Test on Tuesday. The entire day was lost through rain, with the tourists on 248 for seven in their first innings and a total of 86.2 overs bowled in the first three days at the Sydney Cricket Ground. The only chance of a result seems to be some creative declarations from rival captains Steve Smith and Jason Holder, but Windies coach Phil Simmons said the weather would have the final say. “I think we need to see how much play we get tomorrow first,” Simmons told reporters. SCORECARD: Australia vs West Indies 2015-16, 3rd Test at Sydney

“One side is telling me there is showers again in the morning and now I’ve just heard there may be showers in the afternoon too so we’ve just got to see what happens tomorrow then we go from there.” With no action to speak about on the field, Simmons was asked if there was a light at the end of the tunnel for his beleaguered team after two heavy Test defeats in Hobart and Melbourne. “I think we have seen in the last three days of cricket [including Melbourne] we’ve had, we’ve improved and our batting seems to be thinking about it more and fighting a little bit harder to not give the Aussies wickets,” he said.

“There is a lot of light [at the end of the tunnel] with the players and I think you can mention [Kraigg and Carlos Brathwaite] because they have got runs. The way how [Darren] Bravo has batted in all the Test matches. The way [Rajendra] Chandrika has looked. He hasn’t gone on to a big score but the way he looked early on. Even the captain (Holder) when he batted in the second Test on the last day you can see there’s a lot there to work with.” But Simmons, who has had his brushes with the West Indies cricket board, believes for the Caribbean team to progress in Tests it will need all its best players from the three formats of the game. Phil Simmons: WICB needs to solve problem of players’ absence

While the Test team struggles, Chris Gayle, Dwayne Bravo, Darren Sammy and Andre Russell are in Australia but playing in the Twenty20 Big Bash League. “I still have the feeling that it will always be good to get the best players from the West Indies playing all formats of the game,” he said. “If we can get that, then we will have an organisation that is moving forward. That is my hope now, at the end of the day we might have a solution but we still might have players that might not think they can play Test cricket, or might not really want to play Test cricket anymore. So when we get to that solution between the parties that are involved then we can see where that takes us.” Further rain is forecast on Wednesday. If play is possible the West Indies will resume with Denesh Ramdin on 30 and Kemar Roach yet to score. 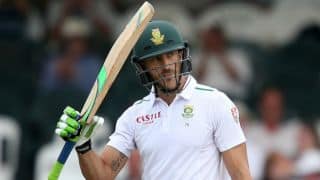