West Indies will aim to end their Australia tour with some sense of pride, after getting hammered in the first two Tests.

West Indies have one last chance to redeem themselves when they take on hosts Australia in the third and final Test at the Sydney Cricket Ground (SCG) on Sunday. Having conceded a 2-0 series lead to the Australians, who have outperformed the tourists in every department in the series so far winning the first two games by an innings and 212 runs and 177 runs respectively. The final Test will see the Australians opt for two spinners, with Stephen O’Keefe set to feature in his second Test in place of Peter Siddle, on a turning track at the SCG, although both sides will be praying for the match to happen uninterrupted as forecasts of rain have been doing the rounds of late. LIVE CRICKET SCORECARD: Australia vs West Indies 2015-16, 3rd Test at Sydney, Day 1

Australia has every reason to be in a relaxed state of mind ahead of the New Year’s Test at Sydney, having breezed through the first two games at Hobart and the Melbourne Cricket Ground (MCG) respectively. Australia had earlier named their team for the third Test, with O’Keefe replacing Siddle, who had questions over his fitness after the second game. O’Keefe’s only Test was against Pakistan in the 2014-15 tour of the UAE. The 31-year-old Malaysia-born left-arm spinner has been in good form in the ongoing Sheffield Shield tournament, where he has taken 17 wickets so far at an average of 24.64. READ: West Indies will aim to finish Australia tour on a high, says Jason Holder

The Australian batting order is in terrific form at the moment, with the likes of Usman Khawaja, skipper Steven Smith, Joe Burns and Adam Voges hitting centuries in the first innings of the MCG Test. Khawaja, in particular, made a terrific comeback into the Test side after proving himself in the domestic circuit, and in the recent concluded Test series against New Zealand. He replaced an in-form Shaun Marsh, who unfortunately had to be shown the door despite a superb 182 in the first Test, with Khawaja retaining the No. 3 spot for the upcoming fixture.

West Indies, on the other hand, have failed remarkably in the series so far, having lost both the Tests convincingly. To their credit, members of their side have displayed occasional moments of brilliance, especially Darren Bravo. The Trinidadian, whose batting style greatly resembles that of legendary former batsman and cousin Brian Lara, struck an impressive 108 at Hobart, followed by a combating 81 off 204 balls at the MCG to guide the visitors to respectable totals and put up some fight against the rampaging hosts. Bravo will be a key target for the Australian attack in the third Test in order to bring a swift end to the West Indian innings. 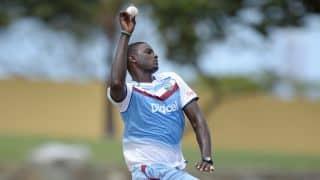