Australia are contemplating bowling two spinners for the first time in 10 years with Stephen O’Keefe in line to partner Nathan Lyon against the West Indies in Sunday’s final Test in Sydney. Not since Stuart MacGill partnered with Shane Warne against South Africa at the Sydney Cricket Ground in 2006 have the home side played with two recognised spinners and circumstances are tilting in O’Keefe’s favour. Steve Smith’s Australians have already wrapped up the three-Test series with thumping wins over the out-gunned Caribbean tourists in Hobart and Melbourne. FULL SCORECARD: Australia vs West Indies, 3rd Test at Sydney

There are injury concerns over paceman Peter Siddle and the SCG pitch has a reputation for taking turn. Team coach Darren Lehmann has foreshadowed O’Keefe’s likely recall after his sole four-wicket Test appearance against Pakistan in Dubai over a year ago. “Our understanding is it’s been spinning. In the games we’ve been watching it’s been spinning. So I would say more than likely it’ll be two spinners,” Lehmann said. “We’ll have to sum the weather up probably closer to day one and we’ve got to wait for all the fitness on the quicks as well.” O’Keefe’s hopes of adding to his one Test appearance have been dashed before, so the 31-year-old left-arm finger-spinner is not over-confident of getting a game.

“It’s so tough to get that second spinning opportunity. It’s been 10 years in Australia since we’ve played two spinners and those two spinners were Warne and MacGill,” O’Keefe said. “It’s a bit of a feather in my cap that they’re considering two spinners given the depth that we have in quicks and given the wickets around Australia are generally more pace-conducive. “We’ll wait and see if the selectors go down that path with the two spinners but I’m feeling pretty confident.” O’Keefe has taken 191 wickets for New South Wales at an average of less than 25 in the decade since his Shield debut and this season has captured 36 wickets in five Sheffield Shield matches. The West Indies historically have had problems confronting spin at the SCG. ALSO READ: Nathan Lyon feels his test spot is under threat

They have not won a Test in Sydney since 1961 and the last time they played at the SCG in 2001, leg-spinner MacGill bagged seven wickets. Skipper Steven Smith sets out in the first Test of 2016 having topped the Test runs with 1,474 last calendar year at 73.70 with six centuries. The new ICC Cricketer of the Year has scored hundreds in the last two Sydney Tests — 117 against India last year and 115 against England in 2014. Australia have dominated the West Indies in this series — over the two matches Australia have amassed 1,313 runs for the loss of 10 wickets, with the West Indies’ cumulative total standing at 924 for 38. The Windies had better moments in the second Melbourne Test than the three-day Hobart shambles, but they still went down by 177 runs. ALSO READ: O’Keefe: Working with Murali has helped

Skipper Jason Holder is hopeful of finishing a miserable tour on an upswing. “Our bowlers still need to be a lot more disciplined than we are at the moment,”  Holder said. “The pitches have been very good for batting. We’ve been allowing them to score both sides of the wicket, and we haven’t been able to contain them and control the game.” While beating Australia might be beyond this mismatched touring team and the Windies have not won a Test in Australia since 1997, they will be looking to gain some respect going forward. 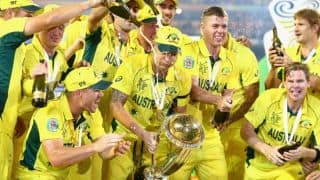