Australia and West Indies face off on the opening day of the first Test at the Bellerive Oval in Hobart on Thursday. The hosts enter the game as firm favourites, having beaten New Zealand 2-0 in a three-Test series last month, and West Indies losing their tour match against Cricket Australia XI (CA XI) by a margin of 10 wickets. The two sides meet for the second time in a Test series this year, with Australia having whitewashed them 2-0 during their brief sojourn in the Caribbean before heading off to England for the Ashes 2015. The pressure on the West Indians is also heightened when considering the past, for they have not won a Test Down Under since 1997, and last won a series here in 1992-93 (thanks to the efforts of Courtney Walsh and Curtly Ambrose). LIVE CRICKET SCORECARD: Australia vs West Indies 2015-16, 1st Test at Hobart, Day 1

Catch the live streaming of Day One of the first Test between Australia and West Indies on starsports.com and Hotstar, and the live telecast of the match on Star Sports 1 and Star Sports HD1.

Live streaming has become the thing to reckon for the modern generation, with users being able to watch the live telecast of various events from across the globe on their computers or on smartphones. Video-sharing websites such as YouTube happen to be among the a popular platform for such facilities, while a lot of television broadcasters are offering the service (both free and paid) on their official websites. Gone are the days when one would have to rely on word-of-mouth to keep oneself updated with the live scores, given the fact that the likes of Star Sports, Sky Sports offer live streaming services on their sites. LIVE CRICKET UPDATES: Australia vs West Indies 2015-16, 1st Test at Hobart, Day 1 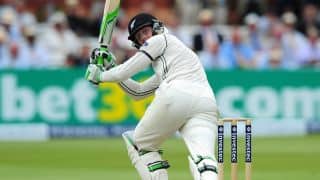