Australia take on West Indies on Day 2 of the first of the three-match Test series at the Bellerive Oval, Hobart .

Australia having scored 438 runs on Day 1 against West Indies at Hobart will look charge in and get the score across 500 to put West Indies on the back foot. Adam Voges and Shaun Marsh added a 317 run partnership for the fourth wicket as the dashed hopes of a West Indies revival on Day 1 of the Frank Worrell Trophy 2015-16. Voges remained unbeaten on 174, while Marsh remained on 139 at stumps. The only bright-side for West Indies was Jomel Warrican, who picked up 2 for 111 in the 22 overs he bowled.  Live Cricket Scorecard and ball-by-ball commentary: Australia vs West Indies 2015-16, 1st Test at Hobart, Day 2

David Warner and Joe Burns put up a 75 run opening stand for Australia after Steven Smith won the toss and elected to bat first. Warner got out making 66 runs while captain Smith remained the lowest scoring batsmen for the hosts’. Warrican picked up Warner and Smith in quick suscession, before Voges and Marsh went on their merry ways.

Voges’s score of 174 not out is now his personal best in international cricket. This is his third century in Test cricket, and second against the West Indies. He had also scored a century against New Zealand at Perth a month ago.

West Indies go into Day 2 with a left ankle injury to left paceman Shannon Gabriel, which means he will be unable to bowl and is also booked in for scans on the joint on Thursday evening. Jason Holder could also face disciplinary problems having bowled on 50 overs in first-two sessions. 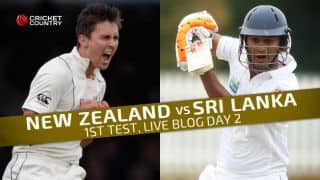 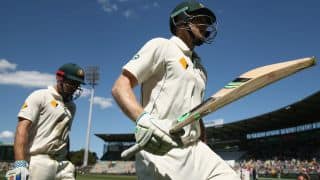