West Indies will aim to bounce back after losing the 1st Test at Hobart.

Australia and West Indies lock horns in second Test at Melbourne on Saturday. The hosts lead West Indies 1-0 in the ongoing two-match Test series after winning the opening match at Hobart by an innings and 212 runs. While Australia have made just one change in the squad that played the first Test with replacing that match’s centurion Shaun Marsh with Usman Khawaja, while the West Indies side are yet to reveal their playing XI for the Boxing Day Test. Australia and West Indies will be led by their usual skippers, Steven Smith and Jason Holder respectively. Despite suffering from multiple injuries, Smith has decided to play the MCG Test. LIVE SCORECARD: Australia vs West Indies, 2nd Test at Melbourne, Day 1

Smith termed Marsh’s exclusion as unlucky, citing that the selection panel had to juggle between opener Joe Burns and him in order to fit an in-form Khawaja into the side, and decided to retain Burns in order to maintain continuity at the top of the order.

According to Ninemsn.com.au, Smith added, “There were lots of talks about it. Shaun’s obviously extremely unlucky to miss out. That was a big part of it. Joe’s been playing quite good cricket, he scored a hundred only a couple of Tests ago.”

He added, “David Warner and Burns average 80 as a pair and it’s pretty important to have a good opening stand.”
Meanwhile, West Indies who are going to play their first Boxing Day Test Down Under since 2000, when Steve Waugh’s men defeated the visitors by 352 runs inside four days and eventually white-washed them 5-0 in the series. Marlon Samuels is the only player from that team to be playing Saturday’s match. READ: Australia vs West Indies 2015-16, 2nd Test at Melbourne, Preview: Hosts look to seal series 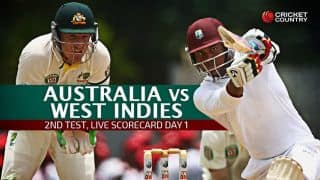