West Indies face off against Australia on Day 2 of the second of the three-match Test series in Melbourne.

The Carribeans, West Indies face off against the Oceania giants Australia on Day 2 of the second of the three-match Test series at the Melbourne Cricket Ground (MCG) on Sunday. West Indies, who have been going through a tough form of late, lost the opening tie to the hosts at Hobart and are already a game down in the seires as they look to win this tie and level things up, as well as  bounce back to stay alive and set a decider in the third and final Test. However, Australia, who are running high on confidence following the opening win would look to seal things here with another win. LIVE CRICKET SCORECARD: Australia vs West Indies 2015-16, 2nd Test at Melbourne

Burns and Khawaja together frustrated the Windies as their partnership was a mixture of effortless play which was inclusive of calculated shots and sensible cricket leading to West Indies’ frustration as Jason Holder hardly had answers to the duo. When Burns had reached his first fifty in the 27th over, Khawaja was in his 30s. Eventually both the batsmen got into a battle of who would bring up the century first. While Khawaja managed to take two runs on the fourth delivery of the 57th taking him to 99. However he failed to take that single in the next two balls which brough Burns on strike in the next over. LIVE  UPDATES: Australia vs West Indies 2015-16, 2nd Test at Melbourne, Day 2 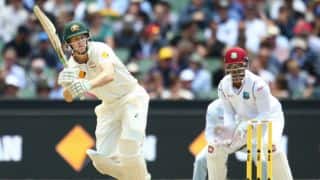