West Indies face off against Australia on Day 4 of the second of the three-match Test series at Melbourne.

Visitors West Indies face off against hosts Australia on Day 4 of the second of the three-match Test series at the Melbourne Cricket Ground (MCG) on Tuesday. Australia are already a game up in the series, following an impressive win in the opening Test at Hobart, and would look to extend their run in the series as well as win it by registering another win and go 2-0 up in the series. However, the West Indies do not look to give up so easily as they aim for a turnaround and win this tie to level terms and stay alive in the series as well as play out the decider in the 3rd Test at Sydney. FULL CRICKET SCORECARD: Australia vs West Indies 2015-16, 2nd Test at Melbourne

Australia ended at 179 for 3 on Day Three of the second Test against West Indies at Melbourne on Monday. Australia gained a massive lead of 459 after they bowled out their opponents for 271 earlier in the day. West Indies skipper Jason Holder executed his first over in style by removing the dangerous Joe Burns for a score of 4 leaving the hosts at 7 for 1. That early wicket played the booster for confidence which seemed to be less in the West Indian camp so far in the match. The debutant Carlos Brathwaite was next in line for making a crucial breakthrough. He went running and slid down while celebrating after he dismissed David Warner in the 11th over. The 27-year-old has had an excellent debut Test, with both bat and ball. LIVE CRICKET UPDATES: Australia vs West Indies 2015-16, 2nd Test at Melbourne, Day 3 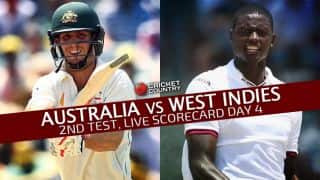