West Indies will need to dig in deep and try to get a commanding first innings score.

Australia will be hopeful of furthering their advantage against West Indies in the ongoing third Test at the Sydney Cricket Ground (SCG) on Day Two after a fantastic performance on the first day. West Indies went to stumps with a score of 207 runs for the loss of six wickets. For them the key is to try and get that score upwards of 300. Carlos Brathwaite is batting at an unbeaten, run-a-ball 35 and will be key if West Indies are to achieve some respectability to their first innings total. Australia on the other hand will hope to clean up the tail as soon as possible. Live Cricket Scorecard: Australia vs West Indies 2015-16, 3rd Test at Sydney

The Sydney pitch offered a fair bit of movement for the fast bowlers early on but it subsided soon. However, turn was a constant feature of the pitch through the course of the match. Nathan Lyon cashed in to take two wickets including that of the well-settled Kraigg Brathwaite for 85. He also dismissed the belligerent Jermaine Blackwood for a paltry 10 runs.

Kraigg was the top-scorer for West Indies and Carlos finished with the second-highest score. Apart from them only Bravo showed signs of resistance and grit. Australia were not deterred by the lack of adequate support from the pitch and continued to trouble the West Indian batsmen with natural ability. Lyon has looked quite threatening and will hope to add a few more scalps to his name. 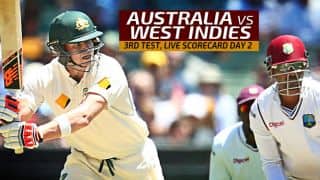