Nathan Lyon also said West Indies cannot be taken lightly as they are a talented side.

Sydney: Australian spinner Nathan Lyon has insisted that his side will not display any mercy to the wounded West Indies side in the Boxing Day Test match in Melbourne. The once-formidable West Indies side crashed to an innings and 212-run defeat in the opening Test of the three-match series in Hobart, triggering widespread criticism from former greats on the current plight of the islanders’ stand in the international cricket. Prior to the tour, the Jason Holder-led side had suffered a humiliating 10-wicket loss to Cricket Australia XI in Brisbane. However, Lyon insisted that the tourists cannot be taken lightly as they are a talented side, adding that he was expecting the West Indies to give the Australians a real good crack during the Boxing Day Test, the Sydney Morning Herald. READ: West Indies in trouble as Nathan Lyon wrecks havoc on Day 2 of 1st Test at Hobart

The 28-year-old further said that Australia won’t taking a backward step, adding that it would be a good challenge for them and that the hosts wouldn’t be taking any mercy on the underdogs. Earlier, Lyon completed 50 Tests for Australia, as he was a part of the playing eleven for the first Test of the ongoing Frank Worrell Trophy 2015-16 that began against the West Indies. Lyon has been Australia’s first-choice spinner in Test cricket, but he does not enjoy the same favour when it comes to limited-overs cricket. Lyon became Australia’s most successful off-spinner earlier this year during the tour of the West Indies, when he went past Hugh Trumble’s tally of 141 wickets in Test cricket. Lyon has so far taken 172 wickets in Test cricket for Australia, and is one of the pillars of their bowling attack. ALSO READ: Nathan Lyon all ready to lead Australia’s bowling attack against West Indies 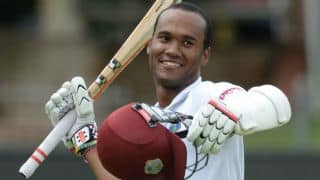