A Federal government minister of New South Wales wanted to shift the Tasmania Test to his constituency.

A Federal government minister of New South Wales, Australia wanted to shift the Tasmania Test match against West Indies to his constituency. However, Tasmania’s Premier has cautioned the Federal government minister not to do so. Tasmania is scheduled to host first Test match since the last three years. Sri Lanka toured Australia three years back and it was then that the last Test was played. Some people had questioned the decision to host the match in Tasmania because it generally does not have a good turnout. This will be the first Test match of the three-match Test series—‘The Frank Worell Trophy.’ READ: Phil Simmons reinstated as West Indies Head Coach ahead of 2015-16 Australia tour

Tasmania’s Premier Will Hodgman was quoted by ABC News Online saying, “Coffs Harbour doesn’t have a beautiful ground like Bellerive [Oval], it doesn’t have the rich cricket tradition that has produced legends of the game like Ricky Ponting and David Boon. Our state is part of the national cricket fabric and and they are well within their rights to go off and try and get a Test match of their own, they’re not having ours.” This was after Luke Hartsuyker, Federal Minister for Vocational Education and Skills said, “I would say to all Tasmanians if you want to keep your local Test turn up and watch and enjoy great quality cricket and if you’re not going to do that, well we’ll be happy to take the Test up in Coffs Harbour.” ALSO READ: Chris Gayle, Dwayne Bravo missing from West Indies squad for upcoming Tests vs Australia

Hartsuyker then replied to Hodgman, “A robust exchange of views is probably a good way to put it, I must say that your local parliamentarians here are very protective of Tasmania and sticking up for the interest of Tasmania just as I am very keen to stick up for Coffs Harbour.” 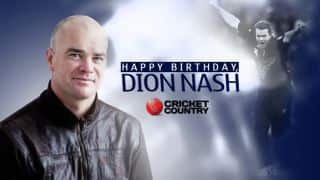