Australia will be aggressive against Indian spinners, says Shane Watson

Australia will be aggressive against Indian spinners, says Shane Watson

Apparently taking a cue from the success of English players, Australian batsman Shane Watson on Sunday made it clear that his side will play aggressive against Indian spinners in the upcoming four-match Test series starting in Chennai from February 22. 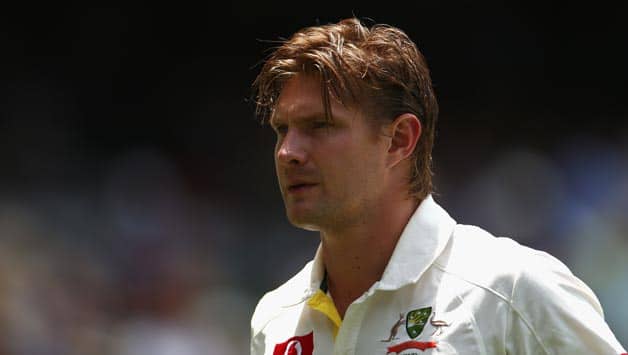 Shane Watson was unbeaten on 84 on Sunday © Getty Images

Apparently taking a cue from the success of English players, Australian batsman Shane Watson on Sunday made it clear that his side will play aggressive against Indian spinners in the upcoming four-match Test series starting in Chennai from February 22.

Asked if the Australians will play like a Kevin Pietersen had done in England‘s successful Test tour of India recently, Watson said, “Absolutely. You’ve got to attack the spinners in a way that doesn’t allow them to settle into a line and length and allow them to bowl that over and over again.

“You’ve got to put a bit of pressure on the spinners like we do against the quicks as well. The guys who have had most success here among foreign players are the ones who have done that. Pietersen is an amazing player of spin anyway and he’s certainly very aggressive against spin.

“And that’s where we have to find the gameplan to be able to have as much success as we can,” said Watson who led the Australians in the second practice game against India ‘A’ in Chennai and hit a strokeful 84.

Watson felt that the visiting side would have enough acclimatisation to the Indian conditions by the time the second warm-up game ends on Monday.

“Obviously it’s not easy to start batting against spin in Indian conditions and that’s why we have got two practice matches, which is to try and get the guys to get their games into a position where when the first Test starts, we have a game plan and we know who has a good chance of working out and executing our plans.

“There’s no doubt that’s what India is going to hit us with. That’s the reason we have come here early, to continue to evolve. Some guys haven’t played in Indian conditions before, in Test matches especially, so it’s a big learning curve for a lot of the guys to be able to improve their game and also find their game plan so they give themselves the best chance of success over here,” he said.

Watson said he was not sure of his batting slot in the team — whether he would open or bat in the middle order, especially so after the injury concern over David Warner.

“I’m not sure at this stage. In first Test, it depends on whether Warner will be fit or not. If he’s fit, I’m not sure, I’ll probably bat at four. But the coach and the selectors and the captain haven’t mentioned either way,” said Watson.

“I certainly love opening the batting, there’s no doubt about that. It’s lot of fun to open batting in any conditions.

But I have played a lot in India over the last little while to be able to hopefully get some success at number four if that’s the case. I don’t know which way the selectors are going to go (if Warner is fit).”

He, however, made it clear that he would not bowl in the whole series.

“I’m not bowling at all throughout this Test series. The last 12 months haven’t been that fruitful for my body. I haven’t been able to get through that much cricket without being injured. And it’s also affected my batting, coming back from injury and it’s taken a little time for me to find my feet with my batting,” he said.

“In short-term I am going to concentrate on my batting and build up my running fitness to be able to get my body to a place where I can hold together for a series or so. The medical staff and I are working out a plan and trying to get me to a stage where I am bowling. At the moment I am just batting and running and doing all the things I can,” he added.

“I love bowling, I am not going to give that up. It’s just that in the short-term I am just giving my batting a chance to improve.”

“Especially in Indian conditions, because those guys have played very well in India in the past. That’s a challenge for us no doubt, but we have the players to be able to handle any situation.”