Virat Kohli will be the biggest threat to Australia in their upcoming home Test series against world's top-ranked India.

Virat Kohli will be the biggest threat to Australia in their upcoming home Test series against world’s top-ranked India. Kohli’s current form notwithstanding, his previous record in the country has been outstanding.

On India’s previous tour of Australia in 2014-15, Kohli scored 692 runs across eight innings at an average of 86.50. He made four centuries and one half-century.

Michael Hussey feels controlling Kohli will be the key but the home team will have to be patient for long periods of time. “The Australians will prepare well against Kohli, but it comes down to execution. In my view the Aussies need to be incredibly patient and disciplined for long periods of time against a world class player like Kohli,” Hussey told PTI.

While Kohli has excelled on the personal front, as a captain, he has led India to two overseas Test series defeats in 2018. At the start of the year, they lost in South Africa (1-2) and then in England (1-4). Hussey isn’t reading too much into past performances saying India played well in England despite what the scoreline suggests.

“It’s a completely new series in completely different conditions. I think India played some brilliant cricket in England but unfortunately, the results didn’t go their way,” the 43-year-old said.

Australia are currently recovering from the ball-tampering scandal that has jolted their cricket at its core. Their three players are currently serving bans while Cricket Australia has come under heavy criticism for fostering and promoting win-at-all-costs attitude.

“It has been a tumultuous period for Australian cricket both on and off the field but I think the controversy is behind us now and everyone involved can just focus fully on the cricket. Australia will of course miss (David) Warner, (Steve) Smith and (Cameron) Bancroft.”

Following the bans, Tim Paine took over as the Test captain. He recently led them to a 1-0 Test series against Pakistan in the UAE but despite unfavorable results in his brief stint, Paine has received the backing of Hussey. “I wouldn’t underestimate Tim Paine, he is an excellent competitor and will be up for the fight against India. Yes, he has the mental strength to lead this Australian side,” he said.

Australian Cricketers’ Association has demanded to revoke the bans on the trio with immediate effect following the findings of a culture review. Hussey doesn’t see that happening but does advocate for their integration into domestic cricket earlier. “Personally, I don’t see that happening, however I would love to see them integrated into domestic cricket earlier, in particular the Sheffield Shield competition,” he suggested. 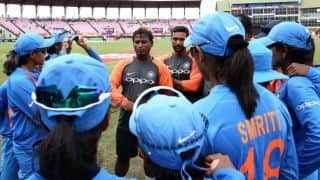