Australia clinched a 75-run victory over the West Indies on Friday to win the third and final Test and wrap up the series 2-0. 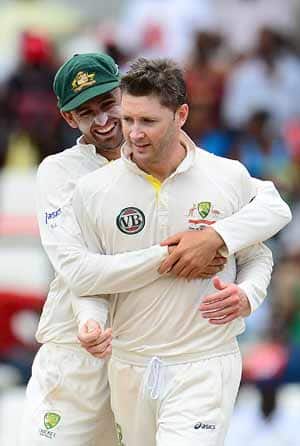 Australia clinched a 75-run victory over the West Indies on Friday to win the third and final Test and wrap up the series 2-0.

West Indies resumed on the final day on 173 for five at Windsor Park, chasing 370 to win.

They added 121 more runs on the final morning to frustrate the Australians with West Indies skipper Darren Sammy hitting a Test-best 61 before they were bowled out for 294 just before lunch.

Australia won the first Test in Barbados by three wickets with the second match in Trinidad ending in a draw.

Veteran left-hander Shivnarine Chanderpaul surpassed 10,000 runs in Test cricket but was one of two key wickets to fall in the last half-hour, leaving the West Indies with a Herculean task of beating Australia in the third and final Test.

The unflappable Guyanese reached the landmark en route to a top score of 69 as the West Indies, chasing an imposing 370 for victory, finished the fourth day at Windsor Park on 173 for five.

When he moved to 14 by clipping left-arm spinner Michael Clarke through mid-wicket for a single – a stroke that has typified his 140-match career – he became only the tenth batsman overall and the second West Indian to break into the exclusive club.

Chanderpaul and Darren Bravo, who stroked 45, had offered the West Indies a glimmer of hope Thursday when they engaged in an entertaining 110-run stand for the fourth wicket, after the hosts seemed on the brink of implosion at 45 for three.

But Bravo edged medium pacer Shane Watson behind half-hour before the close and Chanderpaul perished in the last over of the day, lbw to Clarke on review, to leave the Windies with a near impossible task of getting the remaining 197 runs on the final day with only five wickets in hand.

Narsingh Deonarine was unbeaten on 11 at the close.

Earlier, off-spinner Shane Shillingford finished with a 10-wicket match haul as Australia were dismissed for 259 after resuming the day on 200 for six.