Beth Mooney's century propelled Australia to a total of 413 for 8 on the board.

Mumbai: The Australian women‘s team warmed up in style as they thrashed India A by 321 runs in the first of the two practise games. Put into bat, riding on a superb century by wicket-keeper Beth Mooney (115) , the visitors posted a mammoth 413 for 8 on the board in their allotted 50 overs and then bundled out the hosts for a partly 92 in 29.5 overs at MCA. The Australian Women’s team will play Indian Women‘s team in a three-match ODI series starting from March 12 at Vadodara and later in a T20 tri-series, the third team being England.

In the first practise game held here, Australia made the Indian bowlers toil hard. It was Mooney who stole the limelight as she blazed to a quickfire 115 in just 83 balls before being retired out. Others too chipped in with their valuable contributions as the Aussies went past the 400-run-mark on a pitch which was friendly for batswomen. Opener Nicole Bolton (58 off 38 balls), Ellyse Perry (65 off 58 balls) and Ashleigh Gardner (90 off 44 balls) all had good match practise as they used the conditions well and helped their side post a big total.

India bowlers were hit round the park. Kavita went for 54 runs in her seven overs, skipper Anuja Patil gave away 63 runs in 8 overs, while Tanushree Sarkar gave 57 in her seven overs. Asha S was hammered for 55 in her six overs while Sarika Koli also gave 67 runs in her eight overs but picked up three wickets. When it came to batting, the hosts surrendered to the opposition bowlers and did not put up any fight. Wickets fell at regular intervals.

While the visitors would be happy with their performance, the hosts would be hoping to make a strong comeback in the second warm up game at the same venue on Thursday. 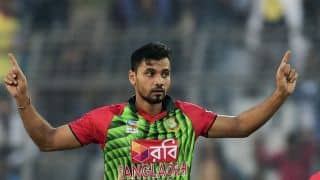