Australia's public broadcaster said it will not broadcast or report live from the upcoming Test series in India after deciding not to pay inflated rights fees. 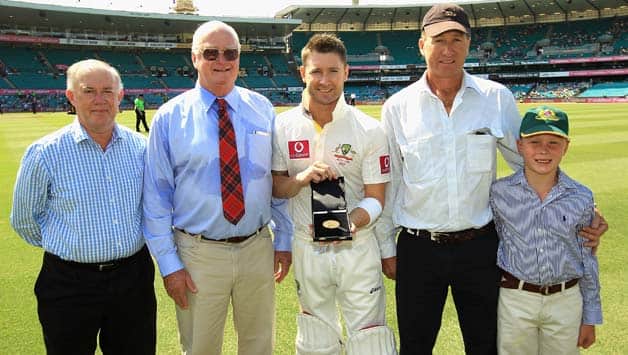 ABC had intended to send veteran radio commentator Jim Maxwell (left) to cover the series, but the BCCI refused him accreditation © Getty Images

Australia’s public broadcaster said it will not broadcast or report live from the upcoming Test series in India after deciding not to pay inflated rights fees.

The ABC said it could not afford the broadcast rights fees demanded by the Board of Control for Cricket in India (BCCI), understood to be much higher for the four-Test series beginning February 22 than previous Australian tours.

It had still intended to send veteran radio commentator Jim Maxwell, but the BCCI refused him accreditation.

“It is really disappointing,” an ABC spokeswoman told AFP.

“It will result in it being covered through the news just like a news item but there won’t be any feeds, certainly not ball-by-ball coverage.”

As a general rule, ABC covers Australia’s Test matches in India, although it did not broadcast the 2010 series as it clashed with the Commonwealth Games.

The ABC said its managing director Mark Scott was negotiating with the Indian High Commission in Australia to reverse Maxwell’s accreditation decision.

“We are leaning on Cricket Australia to help out because this means that there is no free-to-air broadcast of what’s happening over there,” the spokeswoman said.

Maxwell said the BCCI instead offered him a place in a VIP box for the entire series.

However, he said this invitation came “with the proviso that if I wish to report on proceedings, because I am not a rights holder, I’ll have to leave the ground”.

“So, obviously that is unacceptable to the ABC and we’ve decided not to go,” he told the broadcaster.

“Essentially it seems as though the fact that we didn’t take up the rights, they feel as though as a radio reporter I don’t have a position there. I am not able to report live from the ground.”

The development follows a rights dispute between some media organisations and the BCCI over England’s tour of India last year.

News agencies including AFP, Thomson-Reuters and the Associated Press suspended text and photo coverage of the England series over the BCCI’s decision to bar photo counterparts such as Getty Images and Action Images.