Eight designs are in contention, ranging from the early 1980s to the early 2000s.

Cricket Australia (CA) has decided to let fans of Australian cricket decide the nature of the defending champions’ uniform for the 2019 ICC Cricket World Cup.

In a new poll, CA has asked Australians their preference from eight past one-day kits ranging from the early 1980s to early 2002s, with the most voted option becoming the Australian team‘s kit this summer. (READ: Australia s major sports pledge to close gender-pay gap)

Over the next week, cricket fans will have the chance to select the retro ODI kit to be worn by the Aussie Men’s Team next summer!

The poll, which will run over the next week, will determine what Australia wear at the World Cup in England.

Each day, said CA, two famous kits will be presented to fans in their original form with votes to be counted across the cricket.com.au website, CA Live app and social media platforms.

Australia have 10 ODIs left before their defence of the World Cup: five in India and five against Pakistan in the UAE. 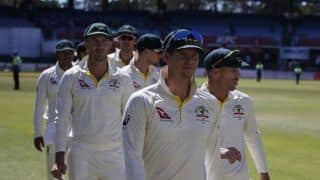