In this video, Australian cricketers try copying his style and the only ones who come close are former skipper Ricky Ponting and wicket-keeper Brad Haddin.

What do you expect from the passionate fans when they come to watch an action packed match between two sides filled with super stars. In the Sydney Test between India and Australia earlier this year, a group of 500 turned up dressed as their favourite hero. They weren’t dressed as Virat Kohli or the just retired MS Dhoni or the in-form local boy Steve Smith, but they turned up as Richie Benaud.

Benaud, who passed away on Friday, was called the ‘voice of cricket’ and just like the bunch of men dressed like him in Sydney, everyone tried to imitate his commentary style. Richie was one of his kind and none could do master his style. He retired from cricket in 1964 to pursue journalism, and later earned fame for his witty liners and distinctive tone.

In this video, Australian cricketers try copying his style and the only ones who come close are former skipper Ricky Ponting and wicket-keeper Brad Haddin.

It’s a line tried by most cricket fans , something that sounds in between “two for twenty-two” and “chew for chewnty chew”. The video starts with Shane Watson, who says ‘two for 22’ in Benaud’s style. Xavier Doherty and Daniel Christian come next and try for the signature voice. Ponting then gets a chance in the next frame and comes really close in replicating the late Benaud’s voice saying, ‘Here we are back in the SCG, England are two for 22.’

Mitchell Starc fails miserably while Ryan Harris terms ‘difficult’ to copy the legendary’s voice. Steve Smith, George Bailey, James Pattinson, Pat Cummins all appear in the video and give a shot but end up failing miserably. Haddin comes closer to Benaud’s voice when he says the signature ‘marvellous catch.’

Mike Hussey concludes the video in a funny style. Hussey, while studying in the high school, used to copy Benaud’s way of saying marvellous” and present in front of the whole school. 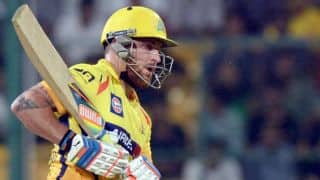