Players from five of Australia s six ICC Women s World Cup winning teams were presented with winners medals at a function in Brisbane last night, almost 40 years after the first triumph. Despite being awarded the Jack Hayward Trophy at the time, Australia s 1978, 1982, 1988, 1997 and 2005 winning teams were officially recognized with medals at the Gallery of Modern Art Brisbane. The 2013 winning team, which was awarded medals, and the Australian squad which will contest this year s World Cup were also in attendance. The dominance by Australian women on cricket s world stage extends over decades, having claimed six out of a possible 11 titles, with England (three) and New Zealand (one) the only other victorious countries at the pinnacle 50-over event. Full Cricket Scorecard: ICC Champions Trophy 2017, Australia vs Bangladesh, Match 5 at The Oval

Prior to 2005, the International Women s Cricket Council (IWCC) was responsible for running the Women s World Cup and did not award medals to individual players. The presentation, made by Cricket Australia s Chairman and an International Cricket Council (ICC) Director, David Peever, and CA s Chief Executive Officer James Sutherland, follows a decision of the ICC Chief Executives Committee in June 2016 to award medals to players and support staff of all World Cup-winning squads who did not receive them at the time of their successes. Merv Hughes: Payment issues between players and Cricket Australia will resolve soon

Commenting on the presentation, Mr Peever said: While women s cricket has a way to go, and we acknowledge that, the women who were part of these five World Cup winning teams are the trailblazers and the backbone of getting women s cricket to where it is today. Women s cricket was not supported financially or professionally in the way it is today, or in the way Cricket Australia envisages for the future. Just to get on the field for the World Cups of the past, certainly before the women s association joined the ACB in 2005, our female cricketers had to fight, and fight hard. David Warner backs fellow players and ACA on CA’s pay dispute row

Cricket Australia is totally committed to women s cricket and we owe it to these women, to say thanks for the belief and the hope they gave new generations who have watched them lead the way. No cricket team, in the history of the game, has ever dominated one format like our players have commanded the Women s World Cup. Led by captain Meg Lanning, Australia s current squad will depart for London on 10 June in preparation for the 2017 ICC Women s World Cup in England and Wales. Australia s quest to claim a record seventh World Cup will begin on 26 June against the West Indies in Taunton. 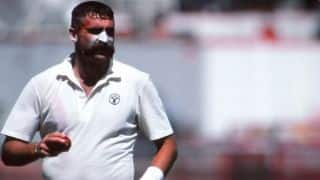