There have been four Lawyers Cricket World Cup tournaments held so far, which has 12 regular teams participating

The regular participants in this World Cup are England, India, Pakistan, Sri Lanka, West Indies and Australia. New Zealand, South Africa and Ireland have participated in few World Cup matches. Bangladesh will join for the first time in this World Cup. In order to play in the Lawyers Cricket World Cup, The Bar of England and Wales Cricket World Cup was formed in 2007. The team duly flew to Hyderabad as the tournament was held in India, where England ranked last at the points table. India won the tournament in the first edition, since then biennially the match was held in India. ALSO READ:

The fifth edition is being held at Australia. For this World Cup, the Cricket Association of Advocates in India is fielding two teams this time, with one of them featuring criminal lawyers from Mumbai- all-rounder Abhishek Yende and opening batsman plus off-spinner, Shantanu Phanse. It is a 12-day tournament and 35-over tournament. 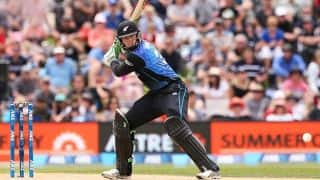 Martin Guptill — the overwhelming rise of the New Zealand batsman