The Australian media on Tuesday blasted the Indian Cricket Board for refusing to use the Decision Review System after two home side players were dismissed controversially on the opening day of the first cricket Test. 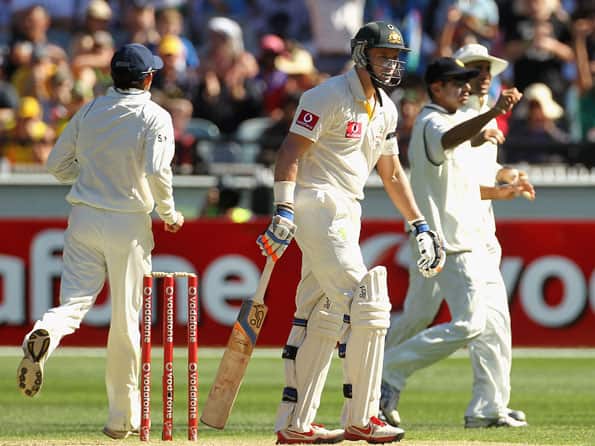 The Australian media on Tuesday blasted the Indian Cricket Board for refusing to use the Decision Review System after two home side players were dismissed controversially on the opening day of the first cricket Test.

Both Mike Hussey (0) and debutant Ed Cowan (68) were adjudged caught behind by the on-field umpires even as the TV replays suggested that they did not edge the ball.

The Daily Telegraph wrote that Cowan was “robbed” and that “Australia was gutted by howlers”.

“India’s stone-age attitude to technology may have also cost Mike Hussey his career,” it said.

Under the headline ‘Controversial dismissals leave India with the momentum’, The Age reported that “Australia’s grit to fight itself into the ascendant position on the opening day of the Test was brought unstuck by two controversial decisions that halted the home team and left India finishing the day with a sense of having if not won the day then at least having salvaged the momentum.”

However, it also wrote when Brad Haddin was not given LBW while on 19, the issue was balanced.

In another strong reaction, Sydney Morning Herald said, “India’s stubborn rejection of state-of-the-art decision review technology has taken only hours to cause a major storm in Australia, with Ed Cowan and Michael Hussey dismissed in controversial circumstances on day one of the Boxing Day Test.”

“There was trepidation in the lead-up to this Test series about the potential for umpires to be embarrassed by Nine’s use of its ball-tracking and Hot Spot devices in its coverage after India once again refused a decision review system despite Cricket Australia pleas,” it said in a write-up titled ‘An issue in black and white’.

“Those predictions proved spot-on, unlike the disputed pair of decisions from umpires Marais Erasmus and Ian Gould.”

The newspaper wrote, “The Indian cricket board’s move to scuttle the decision review system cast a controversial pall over the last session of the Boxing Day Test and cost both Mike Hussey and Ed Cowan their innings.”

“The review system was introduced to eliminate howlers, but players have subtly changed its purpose by demanding it measure the sub-atomic. Still, the ICC boasts it has improved the accuracy of umpires’ decisions and it has statistics to support the argument,” it said. (PTI)