Australian's media labelled as "humiliating" the dramatic batting collapse that cost the country's cricketers a chance to win the fourth Ashes Test against England at Durham. 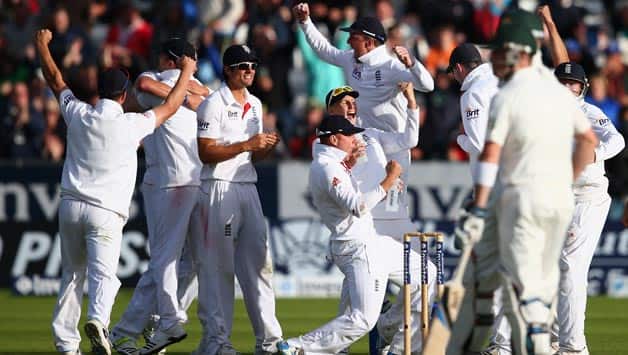 Australian‘s media labelled as “humiliating” the dramatic batting collapse that cost the country’s cricketers a chance to win the fourth Ashes Test against England at Durham.

Set 299 to win on Monday’s fourth day at Chester-le-Street in Durham, Australia were well-placed at 168 for two but crashed to 224 all out, with paceman Stuart Broad ripping through the middle order on his way to taking six wickets for 50.

“No-one does shameful collapses quite like Australia and Michael Clarke‘s side conjured up one to remember, or rather to forget, at Durham to hand the Ashes series to England,” said The Australian‘s cricket writer Wayne Smith.

“Not since it was beaten in 1953, 1955 and 1956 has Australia lost three Ashes series in succession but rarely, with so much on the line and with victory so clearly in sight, has a team succumbed so meekly.”

Australia were scenting victory after a solid century opening stand between David Warner and fellow left-hander Chris Rogers but Rogers was out for 49 and his partner (71) was the third batsmen dismissed as eight wickets fell for just 56 runs.

“Australia had already conceded the Ashes but a humiliating batting collapse at Durham has rubbed salt into their wounds,” said the Sydney Morning Herald‘s Chris Barrett.

“Without a Test win since January, Australia will drop to fifth in the world rankings behind Pakistan unless they prevail at the Oval,” he added, referring to the final Test from August 21.

Under the headline: “Choking: It’s Australian for cricket,” the Sydney Daily Telegraph said the defeat was hard to stomach after a sterling effort from the Australian bowlers, led by Ryan Harris.

“Australia’s fragile batsmen turned the sniff of victory into the now familiar stench of defeat after another abject capitulation consigned them to a humbling loss in the fourth Test at Chester-le-Street,” cricket reporter Richard Hinds wrote.

“If the individual performances were disappointing, the collective result was demoralising for the Australians who had, with one session of dire batting, turned an excellent start to the run chase into a seventh defeat in their past eight Tests.”

Captain Clarke, whose side now trail 3-0 in the five-Test series, said he was devastated and his bowlers deserved better from the batsmen.

“[England] might have scored a few too many but our bowlers throughout this series have done a wonderful job,” he told the Australian Broadcasting Corporation, singling out Harris, who took 7-117 in the second innings to give Australia a chance of victory .

“He’s a wonderful player and that’s a big part of why I feel the disappointment right now to have let Ryano down.

“He’s bowled out of his skin this series and to be able to not bat as we need to in this second innings, I feel like I’ve let him down as well.”