The Australian media on Monday described the star-studded Indian batting line-up as "useless rubble" and skipper Mahendra Singh Dhoni as a "passive captain" as it taunts the visiting team for its abject surrender in the ongoing Test series. 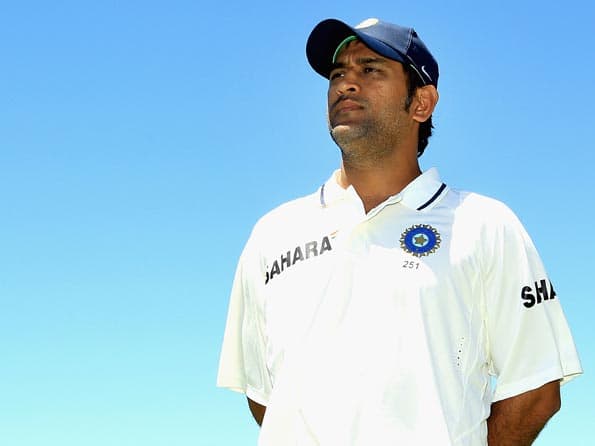 MS Dhoni is the most passive captain to have visited Australia after Andrew Flintoff in 2006, The Australian wrote Getty Images

The Australian media on Monday described the star-studded Indian batting line-up as “useless rubble” and skipper Mahendra Singh Dhoni as a “passive captain” as it taunts the visiting team for its abject surrender in the ongoing Test series.

India meekly surrendered the four-match series after being humiliated by Australia by an innings and 37 runs in the third Test here and the local media targetted the visiting side’s highly-rated but struggling batsmen and captain Dhoni for the spineless show.

Under the headline ‘India’s pillars of strength reduced to useless rubble’, The Australian wrote, “Dhoni is not the only shaky pillar of what only eight months ago was the number one cricket nation in the world. VVS Laxman, once the scourge of Australian bowlers, is being flayed himself at home after scores of 2,1, 2, 66, 31 and 0.

“Virender Sehwag, who warmed up for this series by scoring the fastest double century in One-Day International history, also is trending south faster than Scott and Amundsen, having followed up his whirlwind 67 in Melbourne with innings of 7, 30, 4, 0 and 10.

“Worst of all, Dhoni has failed with the bat. The Indian captain is no thunderer at the best of times — neither is coach Duncan Fletcher, which may be part of the problem — but how can he demand more of his batsmen when he has nowhere to hide behind scores of 6, 23, 57no, 2, 12 and 2? India has not had a single century-maker in the past three Tests,” it said.

Dhoni was described as one of the most passive captains to have led a side in Australia and one who doesn’t inspire his teammates.

“Dhoni is the most passive captain to visit these shores since Andrew ‘Freddie’ Flintoff, whose 2006-07 England side also was coached, wait for it, by Fletcher. He allows matches to drift aimlessly and by the time he acts, it usually is way too late. Why, for instance, did he allow Warner and Cowan to put on 88 runs before introducing his fastest bowler Ishant Sharma?” a write up in The Australian asked.

“After Ryan Harris broke through for the well-deserved wicket of Rahul Dravid, Clarke chased him halfway down to fine leg to give him a pat on the back. When Umesh Yadav took his fifth wicket in the Australian innings, he collected his hat and walked away without so much as a handshake from teammates,” the newspaper wrote.

Daily Telegraph said that India’s performance was “so bad that the first question that came Michael Clarke’s way at the press conference was ‘did it feel as if you were playing Bangladesh?'”.

The newspaper also played up Dhoni’s one-match ban due to the Indian team’s slow over-rate in the third Test.

Under the headline ‘Dhoni dumped from Adelaide Test’, the newspaper wrote, “India’s shambolic tour of Australia plunged into unprecedented disarray when their captain MS Dhoni was sensationally banned from playing in the final Test due to slow over rates.

“The decision has caused an uproar in India with the desperately out-of-form Virender Sehwag to be new captain and little-known Wriddhiman Saha, who has played one Test, likely to take over with the gloves.

“It leaves India in absolute crisis as Sehwag, who is averaging just 19 for the series, has been under fire for a nonchalant attitude. Given he looks incapable of dealing with his own problems it seems inconceivable that he could lift a team which looks broken and pining for home,” the newspaper said.

It pointed to statistics to show Australia’s domination in all departments of the game in the three Tests of the four-match series.

“Statistics reveal everything about Australia’s domination. Where Australia averaged 47.08 per wicket in the series, India managed a feeble 22.9. Australia have made four individual scores of 134 or better yet India’s best has been 83. Australia’s fast men had their fingers around India’s throat all series with 57 wickets at 19,” it said.

Herald Sun wrote about how Australia built up a team after the Ashes humiliation last year while sarcastically mentioning the visiting players skipping practice sessions in the tour.

“As painful as it was, getting flogged in last year’s Ashes may be remembered as the recession Australia had to have. Nothing is being taken for granted in Australian cricket any more. The new coaching unit is working well under head coach Mickey Arthur and Australia has worked hard to freshen up every aspect of its game,” it said.

“India, by contrast, just lobs along, its players pocketing millions each year and too spoilt to make major sacrifices. It’s appropriate that many Indian players spent a lot of time last week sitting under trees at training, because their entire Test match game is being left in the shade.”

“A year after Australia were mercilessly ground into the dust in the Ashes, captain Michael Clarke has ordered his team to do the same to an Indian team careering towards a shattering series whitewash,” the newspaper said.

Australia played with a menace rarely seen since the Warne era to poleaxe India by an innings and 37 runs in less than 2 1/2 days for a 3-0 series win and the Border-Gavaskar Trophy.

Australian cricket is getting its mojo back through the collective grunt of a posse of hungry fast bowlers who simply terrorised India. Buoyant captain Clarke is searching for the ruthless consistency that characterises Australian cricket when it is in juggernaut mode,” it said. (PTI)

Indian cricket needs to have a meaningful exit policy