Australia coach Darren Lehmann said on Monday that Michael Clarke could not be written off so easily for the upcoming Test series against India, even though Clarke is suffering from a hamstring injury at the moment, adding that his participation in that series would not be revealed until later this week.

Australian skipper Clarke, who has been ruled out of the ongoing five-match One-Day International (ODI) series against South Africa, has been suffering from a spate of hamstring injuries recently, which has raised doubts over his availability for the India Test series and even in the upcoming World Cup.

“At the moment he’s captain of Australia and if he’s fit to play and he gets through the next little bit then hopefully he’ll front up in the first Test,” Lehmann was quoted as saying on Cricket Australia’s official website.

“I’m no medico, but basically what we’re going to do is see how he goes in the next couple of days. They [doctors taking care of Clarke’s injured hamstring] were reasonably encouraged, but I don’t know the ins and outs of it too much, I just want to know if he’s in or he’s out. If he’s fit he’ll play – he’s captain,” added Lehmann.

In the event of Clarke not being cleared by his doctors, the National Selection Panel will submit a recommendation for a replacement captain to Cricket Australia Board after they recieve a final diagnosis. Lehmann however, did not wish to speculate a replacement skipper at this juncture. 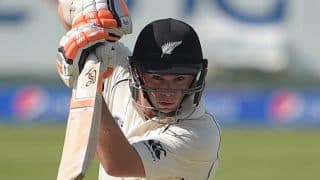