Meg Lanning was on Sunday gagged from taking questions regarding the ball-tempering scandal, involving their men's counterparts.

Australia women’s team T20 skipper Meg Lanning was on Sunday gagged from taking questions regarding the ball-tempering scandal, involving their men’s counterparts, that has rocked the third cricket Test against South Africa in the Rainbow nation. “Obviously, Meg’s here to talk about tomorrow’s game. I know a lot is going on elsewhere. So I expect you guys to respect the fact that Meg’s in middle of a series and she’s not here to talk about that, something that’s happening in South Africa. So today is purely cricket related questions”, Australian team’s media manager Lucy Williams announced at the start of the press briefing.

The Australian men’s team got embroiled in a major controversy in South Africa on Saturday after the issue of ball-tampering surfaced in the ongoing third Test match, leading to the standing down of Steve Smith and David Warner as captain and vice-captain for the remaining of the third Test. The Australian women’s team, on the other hand, are currently playing the T20 tri-series, which also involves hosts India and England.

Lanning praised in-form Indian vice-captain Smriti Mandhana, who scored a 40-ball 76-run innings, albeit in a losing cause as England pulled off a record chase and crushed India by seven wickets today. Look, she (Mandhana) is in great form and she is a very good player and once she gets going, it is very difficult to stop (her). It is very important how we bowl to her early (in the innings) and try and make her to take a few more risks than she is taking in the first few games, Lanning said.

Left-handed Mandhana is in prime form as she had also scored 67 against the Aussies in the lung-opener. 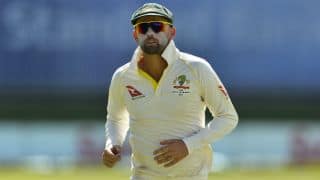