Centurion Virat Kohli on Thursday lashed out at the Australian players for "constantly" indulging in sledging and the local fans Down Under for not treating the Indian cricketers with respect. 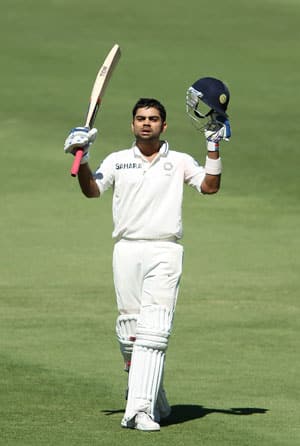 Centurion Virat Kohli on Thursday lashed out at the Australian players for “constantly” indulging in sledging and the local fans Down Under for not treating the Indian cricketers with respect.

“They (players) sledge when they get frustrated.

Obviously it was hot out there. Constantly they were sledging the players so that they could spoil their concentration.

“During that partnership (between him and Wriddhiman Saha) they were really, really having a go,” said Kohli who slammed 116 in India’s first innings total of 272 on day 3 of the fourth and final Test at Adelaide Oval.

There was one particular moment in the field when Kohli had a verbal duel with Ben Hilfenhaus in the middle after he had just survived a run-out.

“I gave it back to him, (I said) you didn’t have to do anything why would you do it,” Kohli, who was the lone bright spot amid the ruins that resulted in India conceding a massive first-innings lead of 332, he told reporters.

Kohli stood by what he did and did not regret his action.

“Ishant and I both came together and started saying, got stuck to them and he got really pissed (off). I usually play my cricket like that and I like to give it back. At the end of the day I was pretty happy with what I did.”

It took an intervention from Ricky Ponting — Kohli was seen being pulled away by the former Australian veteran in the middle — that calmed the situation somewhat.

“He (Ponting) told me not to give it back or I would get in trouble. He was pretty much a help with that.”

Ed Cowan and David Warner, who had an angry spat with Kohli and Ishant in Perth, fortunately didn’t have a go at the young Indian batsman today.

“He actually congratulated me. Both of them actually.

Both of them didn’t say anything. It was pretty low key till that incident happened. In Sydney, they were after me because I wasn’t scoring and here because I got a hundred. Not much has changed except that the reasons have changed.

Kohli was caught showing his middle finger to the crowd after the second Test in Sydney, for which he was fined 50 per cent of his match fees.

“You have to give back verbally and then score a hundred, that’s even better. We don’t go out to take any kind of stuff from anyone. We are international cricketers as well. We have not come here to just participate. They should know that, and we need to let them know that, by talking and by performing.

“It’s really frustrating at times. They say things which they shouldn’t be saying on a cricket field. We go there to play and not to get abuse like that. If they come to enjoy the game of cricket, they should do it, not get drunk and abuse players. It’s not fair on the players.

“If a player says anything they are fined and banned and crowd could say anything and go home. It should be played in a fair way.”

Kohli was on 91 at tea when two wickets fell in quick succession, including Zaheer Khan’s first-ball dismissal.

“Last time he (Zaheer) tried to block and he got out.

This time we asked him to bat naturally. Unfortunately, he got out to first ball. I knew he would play like that. I wasn’t shocked but I was disappointed he got out first ball.

“After tea we lost two wickets off two balls. I was pretty frustrated at that point of time that something like Perth shouldn’t happen again. Next over I decided to go after Harris so that I could get it. Finally, after I got the 100th run, I was on cloud nine. Starting your cricket as a young kid, you dream of achieving Test century and the first one is really special.”

Kohli was on the verge of being dropped after the second Test and he admitted he wasn’t in a very good mental space.

“I wasn’t in good mental space, to be honest. Nobody did anything. I was putting pressure on myself.

Kohli said another thing he did was to completely blank out what was being said or written in the media about him.

“The thing was not watching TV, not seeing news, not reading newspapers. I haven’t touched a newspaper in the last one month. I have maintained if I don’t do well, I will be criticised. If I do well, I would be praised. I need to create a balance between the two.

“It’s not that I have done well, I would now go to internet and start searching articles in appreciation. I would like to be in a (mental) space in which I am now. If I could stay neutral in praise and criticism, I would be in a better mental condition to go out and perform.

“I didn’t pay attention to what was being said or written. People were writing me off after the first Test in Melbourne. What I could do was to control my performance.”

Paying least attention to criticisms did turn things around for the batsman from Delhi.

“Someone playing because of me sitting out is not in my hands. By paying no attention to what is being written or said, I am giving myself the maximum chance.

“As it is, playing for India is a great pressure. The other pressure I neglected and stayed in my space. I didn’t want to not perform because of those reasons and after the game I would be like, why did I put myself mentally under so much pressure.

“Rather, I should be in good space which I did and give myself best chance to perform.”

Kohli said that he was yet to become an established Test player.

“It’s still a learning curve for me. I wouldn’t say I am established in Test cricket, I am learning in every game, if I can learn and perform as well, I would be a better cricketer.

“I definitely wanted to be a successful Test cricketer for India. Hopefully this is the start for me, hopefully I could be consistent going ahead in Test cricket.”

Now that he has succeeded, there is likely to be a clamour for including more and more youngsters in the team, and perhaps the time for seniors to reflect.

“They (the youngsters) are all waiting for their opportunity. They are all talented and skillful as any youngster who gets a chance in the team.

“Putting too much pressure on somebody initially isn’t fair on the guy. You need to let a guy blend into a certain format. Some have a great start and some take time. You got to have some patience with someone who comes in.

“All the players who blew their chances, they are good enough. The day they are mentally tougher, I am sure they would be really consistent in Test cricket.”

Talking about the veterans, he said, “As for seniors, it’s cricket. It happens. Sometimes four score centuries and sometimes only one does it. It’s the first time, they have come to Australia and not performed.

I don’t know why people are.”

There has been a suggestion in media that Indian players don’t take criticism very well. Kohli said it was because of the lack of balance in reaction by the media.

“If you don’t want players to behave in an absurd manner, the criticism and praise should be at a certain level. You can’t crush the legends of the game in 5-6 Tests. What about the 180 Tests, 150 Tests they played before it. It’s not as if you treat them as king and then pull them down. It’s not fair to players.”

Kohli had praise for Saha who kept well and batted with grit and determination.

“He’s a very positive guy, very competitive. For someone to come and play after only one Test, he kept very well. He was mentally tough, he knew what he wanted to do. I didn’t have to tell him anything. He’s going to be a special player for India.”

Kohli didn’t want to speculate if he would be promoted to number three in the second innings.

“I was getting dropped after Sydney. After Perth, they were asking me to bat at number three. As I said, I am not concentrating on what’s being said or written. Whatever team wants me to do, I will do it.

Instead of worrying about losing the Test, Kohli was hopeful his team could turn around its fortunes on the last two days.

“If we can get 2-3 wickets early, the last time also Australia scored 400 runs on the first day and we chased down the target in the fourth.

“The ball is turning square now. With Ashwin bowling so well, you never know.” (PTI)

I will play for any team in IPL wholeheartedly: Muralitharan