All the South African pacers made life really difficult for the Australian batsmen.

Australia‘s first innings in the second Test against South Africa came to an end during the second session of Day Three as they were bowled out for 246 in 57 overs.

In reply to South Africa’s mammoth first innings total of 423, Australia had already lost four of their main batsmen when play ended on Day Two, as they were tottering at 112 for four.

Day Three started with the South African pacers continuing from where they left off on Day Two. All of them were fast, mean and got the wickets. Vernon Philander first got rid off the set David Warner with a beautiful away swinger. Nightwatchman, Nathan Lyon was then sent packing in the very next over by Morne Morkel.

Then Steven Smith and Brad Haddin came together for Australia. Smith started off with a few boundaries. Both batsmen also got a life each when they were dropped by Hashim Amla and Robin Peterson in quick succession. One felt those dropped chances could come back to haunt the hosts, but their bowlers didn’t move their feet from the pedal, as Dale Steyn soon removed the middle stump of Haddin with a venomous inswinger. Haddin didn’t know what him.

Mitchell Johnson then joined Smith in the middle, and the two of them scored some quick runs, before JP Duminy spinned out Johnson’s off-stump with the last ball before lunch.

Australia ended the first session staring at a possible follow-on, as their score was 205 for the loss of eight wickets.

Resuming after lunch, Morkel got rid off Smith of his first over post the break. Smith got a faint outside edge to the wicketkeeper. The umpire first gave it not out. But the South Africans reviewed the decision, and it was overturned in their favour. 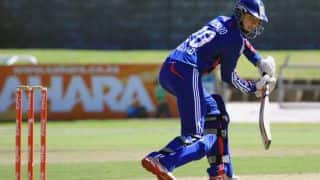 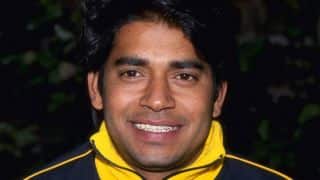