India had joined Australia on top of the table after winning the third ODI in Nottingham at 114 ratings points.

Their dominating performance against England coupled with Australia’s shock loss to Zimbabwe made India the sole number one team in the latest ICC ODI rankings issued here.

“World champion India have been confirmed as the number-one ranked side in the Reliance ICC ODI Team Rankings following Zimbabwe’s three wickets victory over Australia in a triangular series match in Harare on Sunday,” the ICC said in a statement.

India had joined Australia on top of the table after winning the third ODI in Nottingham at 114 ratings points, but took sole possession at the coveted number-one spot after Zimbabwe recorded their first victory over Australia in 31 years. This result meant Australia have dropped three ratings points and slipped behind South Africa and Sri Lanka into fourth position on 111 ratings points.

South Africa, following victories over Australia and Zimbabwe, are sitting in second spot on 113 ratings points, while Sri Lanka also have 111 ratings points but are ranked above Australia in third position by a fraction of a point.

With five ODIs to be played this week, there is potential for further changes at the top of the table, depending how these matches pan out.

For world champion India to finish as the number-one ranked side, they need to win the remaining two matches against England and then hope Australia beat South Africa either on September 2 or 6 (if both the sides clash in the final).

In this scenario, India will be on 115 ratings points, followed by South Africa, Australia and Sri Lanka (depending on the outcome of the remaining matches in the triangular series).

South Africa, who also lead the ICC Test Team Championship, can move to the top of the table if they win their remaining two league matches as well as the potential final against Australia.

If South Africa make this happen and India also win their last two matches, then South Africa and India will be on 115 ratings points each but South Africa will be ranked above India when the ratings are calculated beyond the decimal point.

Australia may have slipped to fourth position but they too can finish the series in number-one position if England beat India in one of the two matches and Australia defeats South Africa on September 2 and then again in the final on September 6. In this scenario, Australia will end up on 114 ratings points, followed by India in second position, and Sri Lanka and South Africa in third and fourth spots, respectively. 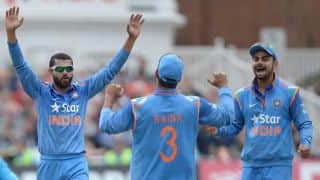