Ricky Ponting has asked Australian team to train their eyes solely on the upcoming World Cup in United Kingdom and not be distracted by the talks surrounding Ashes.

Ricky Ponting has asked Australian team to train their eyes solely on the upcoming World Cup in United Kingdom and not be distracted by the hype surrounding Ashes.

The former captain will join Australian national team as the assistant coach following his stint with the Indian Premier League where he is the head coach of Delhi Capitals.

A three-time World Cup winner himself, Ponting has also asked the pace trio of Mitchell Starc, Pat Cummins and Josh Hazlewood to be ready to play every match in the United Kingdom and the Ashes series that follows the marquee tournament.

“They (Starc, Hazlewood and Cummins) have all had reasonable layoffs now,” Ponting told cricket.com.au. “I know some of them got through the summer and had injuries with Josh and ‘Starcy’ of late, but that should mean that they should go into a World Cup very fresh. None of those guys will be in the IPL either so they need to just manage (themselves) really well, with the thought of playing every game through the World Cup and the Ashes

He has put the responsibility of remaining injury-free on the players. “I’m sure all those bowlers want to do that. It’s up to them to get themselves fit enough and strong enough to give themselves the best chance of being able to get through.”

The trend of fielding two frontline spinners in limited-overs cricket has caught up with Australia and depending on the surface on a given day, they might play an extra spinner meaning in place of a fast bowler.

“Who knows, there might be a few games through the World Cup where it might not be the best to take those three fast bowlers into a game. There might be a wicket that might look like it will be slower and turn more, so you go in with another all-round option and or another spinner,” Ponting opined.

With the Australian team to play at least nine matches and potentially 11 provided they make the final, World Cup will one gruelling tournament. That the Ashes starts 15 days after the final (July 15, 2019) makes it even vital for the team management to ensure the players remain fresh and fully fit.

” management is going to be key, because trying to prioritise a World Cup over an Ashes series it’s impossible. You’ve just got to face what you’ve got in front of you. The whole goal for Australian cricket right now should be to win the World Cup and worry about whatever happens after that,” he said. Current players are benefiting financially from Tendulkar, Dravid, Kumble and others' fight in 2002: Sehwag 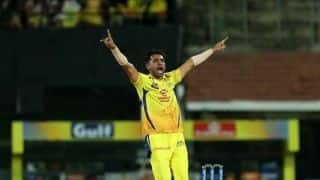