Pakistan opener Azhar Ali has moved up 10 places to reach a career-high sixth rank in the MRF Tyres ICC Player Rankings for Test Batsmen even as top-ranked Steven Smith has finished the year-end rankings with a personal best in terms of rating points. Azhar s scores of 205 not out and 43 in the second Test against Australia in Melbourne, which ended on Friday, could not prevent Pakistan from going 2-0 down in the three-Test series with an innings and 18 runs loss, but was a culmination of some consistent performances in 2016. The 31-year-old opener found his way up from 20th rank during a year which saw him become the first Pakistan batsman to slam a double-century in Australia and also the first from his country to notch two scores of more than 200 in a calendar year.

Smith s 165 not out has taken him to 937 points as he has ended the year where he started in top position. The Australia captain s tally is the 10th highest ever and the highest since former Sri Lanka captain Kumar Sangakkara s 938 points in December 2007. Smith s team-mates David Warner and Usman Khawaja also have much to cheer about. Warner s breezy 144 in Melbourne has lifted him up two places to fifth position while Khawaja has gained five slots to reach a career-best 13th rank after starting the year in 31st position.

South Africa opener Stephen Cook s three centuries in his first year of Test cricket have helped him attain a creditable 25thposition. His scores of 59 and 117 in a 206 runs win against Sri Lanka in the first Test which ended in Port Elizabeth on Friday, has seen him move up 18 positions from 43rd rank before this match.

In the list of bowlers, Bangladesh spinner Mehdi Hassan (34th rank) and New Zealand fast bowler Colin de Grandhomme (51st rank) had fine first years in Test cricket. There is no change among the top five in the list of all-rounders after these two Tests, with Ashwin continuing to lead the table. 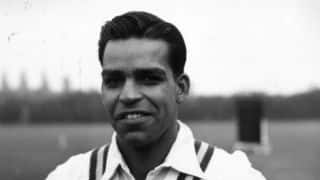 South Africa vs Sri Lanka, 1st Test: Marks out of 10 for roaring hosts