Azhar was a member of the Pakistan team that secured an impressive 2-2 draw in a recent four-Test series against England.

Londres: Pakistan one-day captain Azhar Ali wants to see the team take the form that had made them the world’s number one-ranked Test side into their one-day series against England. Azhar was a member of the Pakistan team that secured an impressive 2-2 draw in a recent four-Test series against England and is now looking for his side to hit similar heights in a five-match one-day international series starting in Southampton on Wednesday. Pakistan, following their results in England, and India’s rain-affected fourth Test draw with the West Indies in Port-of-Spain, are now number one in the Test rankings for the first time in history. FULL CRICKET SCORECARD: Pakistan vs England, 1st ODI at The Rose Bowl

By contrast, they are just ninth in the ODI standings and in danger of missing out on automatic qualification for the 2019 World Cup in England. But Azhar is confident the team’s white-ball fortunes can be turned around following what was, to many observers, their surprise effort in winning two Tests in English conditions. “Confidence is very high and belief is there, obviously coming from the Test series, we had a very good couple of months here,” Azhar told reporters at Southampton on Tuesday. “We take that confidence into the one-day internationals as well. Pakistan vs England, 1st ODI, Predictions and Preview

“Being number one is a massive boost and a proud moment for Pakistan cricket and the whole nation is very happy about it, and as players the team is really happy about it. It’s definitely a good thing for us. Our one-day ranking is not great right now but we will take the opportunity and the way the team is performing, hopefully we can convert it into ODIs as well.” English all-rounder David Willey to join ODI squad despite injury

England’s one-day cricket has been on an upward curve since their embarrassing first-round exit at last year’s World Cup and Azhar is among those who’ve been impressed by how Eoin Morgan’s side have bounced back in the 50-over format. “The way England started playing after the World Cup, they played a lot of attacking, fearless cricket and they’ve been performing very well,” he said. “We know that and we have to be aggressive against them as well.”

“We are all very confident. No one rated us very highly – a few people said we would be competitive but there were doubts if we could win the Test matches here. But the boys really believed in the Test matches, so here also we believe we can do it.” After the Test series, Pakistan thrashed Ireland by 255 runs in an ODI at Malahide on Thursday – Saturday’s second fixture in a two-match series was washed out – but they are now set to face the fit-again Durham duo of fast bowler Mark Wood and all-rounder Ben Stokes, although the latter will be deployed as a batsman only at Southampton.

“Wood is definitely a very good bowler and Stokes a very good all-round player, and a good batsman too,” Azhar said. “Every player they have could be a match-winner for them, so we have to focus on each and every player. If we do that and bring our plans in, we can definitely challenge England.” 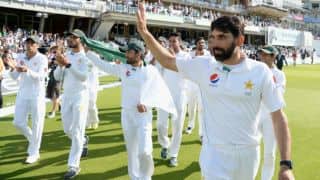 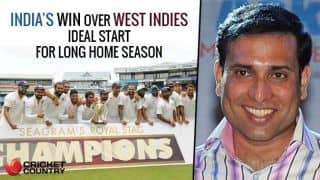