Pakistan allrounder Azhar Mahmood, who is a British national, is in no hurry to play again for the Pakistani team and says he will weigh all pros and cons before taking a final decision. 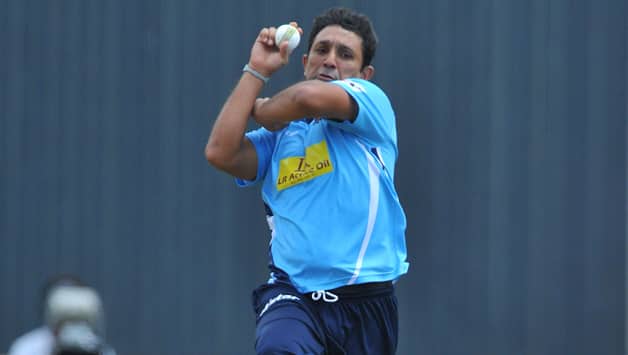 Pakistan allrounder Azhar Mahmood, who is a British national, is in no hurry to play again for the Pakistani team and says he will weigh all pros and cons before taking a final decision.

The allrounder, who last played for Pakistan in the 2007 World Cup, has been mentioned a couple of times in the Pakistani media with stories circulating that the selectors might consider him for the coming tour to India because of his impressive performances in foreign T20 leagues including the Indian Premier League and recent Champions League.

Mahmood, 37, represented Auckland Aces and was among the leading performers in the Champions League T20, finishing as the second highest wicket-taker (10 wickets) besides scoring 160 runs from five matches.

However, the all-rounder, who became a British citizen last year, said that while playing for Pakistan was still his priority, he was not desperate to don the national colours.

“I’ve heard my name is under consideration. It’s an honour for me but I’m not sure if I will agree to come for just one series. I’ll need a concrete offer to make up my mind as I haven’t forgotten what happened to me,” Mahmood told the “Express Tribune” newspaper.

“I am not a youngster anymore and at the twilight of my career, I will have to ensure a secure future for myself and my family,” he added.

“My contract with my county and other T20 leagues will be at stake and it won’t be wise to put everything at stake for just one series,” said Mahmood, who appeared in 21 Tests and 143 ODIs for Pakistan.

Mahmood was bitter about the treatment meted out to him by the Pakistan Cricket Board and selectors and said he still had no idea why he was sidelined from the team five years ago without any reason.

“What was my fault? I just played a single match in the World Cup and was sidelined afterwards. I’ve been performing consistently at various levels since but nobody considered me for a place, while other players were selected on basis of their league performances.”

He argued the impression that he was kept out due to his absence from domestic cricket.

“I just missed last year’s season but featured in the previous years. I performed in 2010 and kept on calling the then selection committee but nobody listened,” he said.

Mahmood said talks were underway for a contract in Australia’s Big Bash event.

“Talks are underway with its organisers and I will play the event if things are confirmed.”

Mahmood, who became a British national in 2011, is now qualified to play for England as his wife is also a British national. He is recognized as a top T20 professional having represented Kings XI Punjab in the IPL and also having played for Auckland, Kent and in the Bangladesh and Sri Lankan premier leagues.