Captain Babar Hayat scored a superb quick-fire half-century against Kenya to drag Hong Kong to a 39-run victory in their World Cricket League match in Nairobi on Sunday.

Captain Babar Hayat scored a superb quick-fire half-century against Kenya to drag Hong Kong to a 39-run victory in their World Cricket League match in Nairobi on Sunday. Coming in as third man, Hayat survived several dropped catches as he pushed and pulled the Kenyan bowlers with disdain to score his 78 runs off 68 balls and set the stage for victory in the rain-curtailed match at the Gymkhana club. Opener Christopher Carter hit 41 and Nizakat Khan scored an unbeaten 20 as Hong Kong closed at 148-4 in 25.1 overs. READ MORE ABOUT HONG KONG CRICKET 1866: Hong Kong & Shanghai play first interport cricket match

Nadeem Ahmed, Ehsan Khan and Tanveer Khan each took three wickets to snuff out the Kenyan response and the home side were skittled all out for 133 in 23 overs, giving Hong Kong victory on the Duckworth-Lewis method. Hong Kong’s victory will however not alter the table standings as the two teams remain fourth and fifth in the eight-team championships. Papua New Guinea and the Netherlands occupy the top two places with 12 points followed by Scotland on nine.

Earlier, Kenya beat Hong Kong by three wickets in their rain-affected first match of the World Cricket League Championship at the Nairobi Gymkhana club ground on Friday to secure two points. Set 223 to win, the Kenyan chase spearheaded by opener-cum-wicketkeeper Irfan Karim, who smashed 67 from 92 balls was jolted when rain twice interrupted play, forcing the target to be adjusted to 200 runs in 43 overs on the Duckworth-Lewis method.

The weather change also hit the rhythm of the match Karim and his second-wicket partner Dhiren Gondaria, who were steadily helping Kenya to recover after the loss of fellow opener Alex Obanda, were removed in quick succession. Gondaria was snared by Ehsan Khan and Karim, whose innings included five fours and a six, soon followed. The home side looked to be in disarray after skipper Rakep Patel, whose tight bowling had helped restrict the Hong Kong batting line-up, was trapped lbw off Khan with only four runs to his credit.

It took tailenders Narendra Patel and Nehemiah Odhiambo to push the Kenyan score beyond the 200 target, and put the home side in the driving seat before the second match on Sunday. Anshuman Rath top-scored with 90 off 92 balls for Hong Kong, who needed all four points to go top of the eight-team ICC World Cricket League, which counts towards the 2019 World Cup in England. 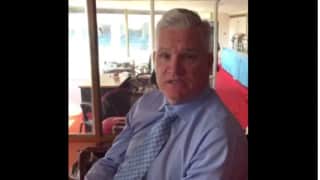