A scintillating century from George Bailey and another five wicket haul for Mitchell Starc helped Australia take a 2-0 lead with a victory by 54 runs in the second ODI against West Indies at Perth on Sunday. 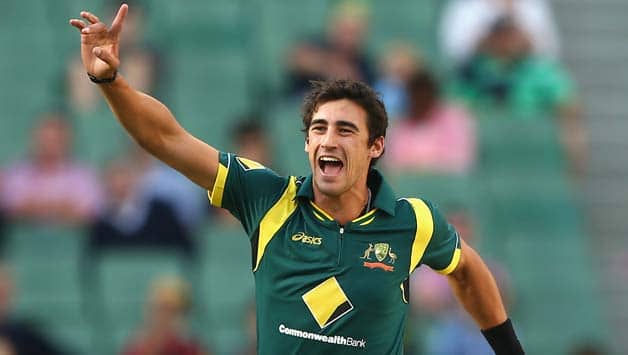 A scintillating century from George Bailey and another five wicket haul for Mitchell Starc helped Australia take a 2-0 lead with a victory by 54 runs in the second ODI against West Indies at Perth on Sunday.

Chasing 267, the visitors were rocked by in-form Starc who picked up two wickets in his first over.

Starc went on a rampage as he picked up his third in the eighth over to reduce the West Indies to 33 for three.

Opener Kieran Powell and Dwayne Bravo brought their side back into the chase with a 126-run stand for the fourth wicket. But Glenn Maxwell, the new million-dollar boy of the Indian Premier League, struck to give his side a vital breakthrough when he sent back Bravo.

A couple of overs later, Starc came back to get rid of Powell as West Indies were struggling at 166 for five.

The lower middle-order failed to pull things back and the visitors were eventually bundled out for 212.

Earlier, Bailey helped Australia reach 266 for seven against West Indies in the second ODI at Perth.

Winning the toss and electing to field, the West Indies captain Darren Sammy was rewarded early for his decision as Kemar Roach got rid of opener Usman Khawaja in the fourth over. Khawaja played an uppish flick, only for Powell to take a wonderful diving catch to send back the youngster to the pavilion.

Next to go was Aaron Finch, courtesy another sharp catch as Darren Bravo plucked one out of thin air at
cover position. Phil Hughes was starting to look good but Captain Sammy dismissed him in the 13th over to reduce Australia to 56 for three.

An over later, Dwayne uprooted Michael Clarke’s middle stump. Australia were further redused to 98 for six in the 24th over.

James Faulkner and George Bailey put on a vital partnership of 100 runs to resurrect Australia’s innings.

Bailey went on to score 125, an innings laced with 10 fours and four sixes.

For West Indies, captain Darren Sammy, who was snapped up by the Hyderabad Sun Risers in the ongoing auctions, was the pick of the bowlers with figures of three for 48.

Bailey and Mitchell Johnson put on a quick-fire stand of 68 runs in 34 balls. Bailey went on to score 25 runs off the final over with one four and three sixes to take Australia to 266 for seven in 50 overs.