"We're talking about one of the good guys in Australian cricket. He's done a fantastic job with that team and if he wasn't aware of what was going on, there's no problem at all" - Allan Border

Cricket Australia CEO James Sutherland raised the green flag with regards to Darren Lehmann on Tuesday night, clearing him of the ball-tampering scandal. However, decisions on Steven Smith, David Warner and Cameron Bancroft will be taken on Wednesday night. Lehmann was cleared of the scandal on the grounds that he was unaware of the ball-tampering plan. As soon as he was given a clean chit, Kevin Pietersen, Michael Vaughan and Michael Clarke questioned the finding that only Smith, Warner and Bancroft were in on the plot to tamper with the ball.

Amidst all this, Allan Border has thrown his support behind Lehmann in a chat with Fox Sports. He called Lehmann ‘one of the good guys’ who deserved to stay on as Australian coach: “We’re talking about one of the good guys in Australian cricket. He’s done a fantastic job with that team and if he wasn’t aware of what was going on, there’s no problem at all. If (CA’s) integrity officer has been through and interviewed people and he’s satisfied that Darren Lehmann didn’t know specifically what was going on at the time, I’m very relaxed. That’s a good news item, isn’t it, not the other way.”

When the ball-tampering scandal unfolded on Saturday, Lehmann was seen talking to Peter Handscomb, who was sitting on the stands, via walkie-talkie. It had seemed Lehmann had ordered Handscomb to replace Bancroft on the field. However, the nature of the conversation is yet to be disclosed. Although Lehmann can heave a sigh of relief for now, CA will be conducting an independent review into the general culture of his team.

Border continued: “The Australian cricket team itself is not a popular cricket team and a lot of their antics on the field have upset a lot of people. And anyone with axe to grind has an opportunity now to stick the knife in. Lehmann has to have a long, hard look at the portrayal of what the Australian cricket team is all about and how it’s perceived. But the ball-tampering situation, he didn’t know anything about that and he’s got things to do going forward.” 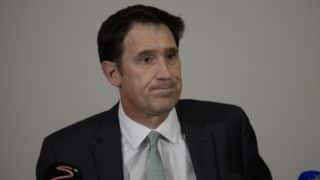