Australian Sports Commission (ASC) chief, the ASC Board, and CEO Kate Palmer, have called for a severe action to be taken against everyone involved in the incident.

Canberra: In what seems to be an extremely shocking incident in international cricket in the recent times, the Australian Government on Sunday asked Cricket Australia to remove Steven Smith as captain with immediate effect, after the Cape Town Test ball-tampering row. Australian Sports Commission (ASC) chief John Wylie, the ASC Board, and CEO Kate Palmer, essentially speaking for the Australian government have called for a severe action to be taken against everyone involved in the incident.

“The ASC condemns cheating of any form in sport. It expects and requires that Australian teams and athletes demonstrate unimpeachable integrity in representing our country. Given the admission by Australian captain Steve Smith, the ASC calls for him to be stood down immediately by Cricket Australia, along with any other members of the team leadership group or coaching staff who had prior awareness of, or involvement in, the plan to tamper with the ball. This can occur while Cricket Australia completes a full investigation,” espncricinfo.com quoted a statement from the ASC.

Australian Prime Minister Malcolm Turnbull, too, slammed the national cricket team for cheating. He added that he had a word with Cricket Australia chairman David Peever and hoped the sport’s governing body would take a “decisive action”.

“I’ve expressed to him very clearly and unequivocally my disappointment and my concern about the events in South Africa. It’s their responsibility to deal with it but I have to say the whole nation who holds those who wear the baggy green up on a pedestal – about as high as you can get in Australia, higher than any politician that’s for sure – this is a shocking disappointment and it’s wrong and I look forward to Cricket Australia taking decisive action soon,” the Australian Prime Minister added.

Meanwhile, Cricket Australia on Sunday launched a formal investigation into the matter. In times that call for an immediate decisions on the future of Steven Smith and other members of the team’s ‘leadership group’ that have been implicated in the acknowledged breach, Sutherland had stressed the need for a due process to be followed.

“We’re in the middle of a game, and that game needs to conclude. I understand that’s not necessarily the fullness of response that everyone is looking for right now, but there’s an element of process that needs to be undertaken here,” he said. Further, Sutherland also confirmed that he hasn’t spoken to Smith owing to the time differences with South Africa.

Earlier on Saturday, when Smith was asked if he was contemplating resigning as the skipper, he had said that he believes he is still the right person for the job. Sutherland also confirmed that as of now Smith is still the captain. 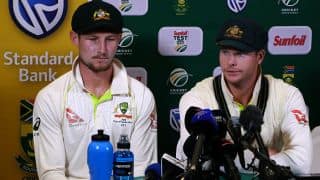 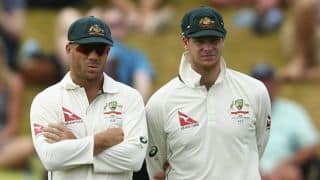