Darren Lehmann, who resigned after fiasco and was replaced earlier this week by Justin Langer as the head coach, hopes that all three will return to international cricket after serving their punishments.

Former Australian coach Darren Lehmann says he “worries daily” about the banned trio post the infamous ball-tampering controversy that rocked Australian cricket. Lehmann admits that he is in regular contact with Steven Smith, David Warner and Cameron Bancroft. Smith and Warner were stripped of their captaincy and vice-captaincy respectively, banned from pursuing any leadership roles for 2 years and handed a yearlong ban from international and domestic cricket. Bancroft, who was caught rubbing the sandpaper on the ball, received a 9-month ban.

Lehmann, who resigned after fiasco and was replaced earlier this week by Justin Langer as the head coach, hopes that all three will return to international cricket after serving their punishments.

“They are all good young men, I feel for the three players especially, they re fantastic and I worry about them day-in, day-out,” Lehmann told Radio FIVEaa on Friday.

“It s been a tough six weeks for myself, but I put myself in David Warner s shoes, Cameron Bancroft, Steve Smith they ve been to hell and back, haven t they?”

While there was a public outcry in Australia after the scandal where the Prime Minister also condemned the act, the fallen trio also received moral support from fans. Lehmann hopes that these players will be forgiven as they are good human beings whom he loves dearly.

“Hopefully, everyone forgives them. I m sure they will. They re bloody good human beings and I love them dearly.

“I speak to them quite a lot. It s a case of keeping in contact because I worry about them. They re going okay.”

Smith returned to Australia earlier this week after a month-long break overseas. He reached out to fans through a social media post for the first time since his emotional press conference. A day later, David Warner, too, thanked fans for support and mentioned he is enjoying time off with his family. 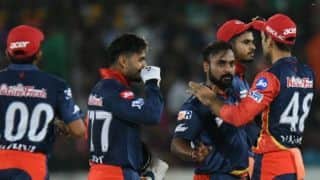