An emotional Smith and Bancroft addressed the press after their arrival in Australia. Warner issued an apology through his Instagram account.

With the verdict for ball-tampering in place, emotional Steven Smith, David Warner and Cameron Bancroft have addressed the media. Smith broke down during the conference several times. Bancroft was gutted but kept his calm during the conference. Whereas Warner and his family were hounded at the Sydney Airport. The opener asked the media to give him and his family sometime. Warner is expected to face them on Saturday morning. Following the emotional conference of the players, a tearful Darren Lehmann too stepped down as the Australia coach. He would be coaching the side for the last time in the fourth and final Test against South Africa. Smith, Warner have been handed 12-month ban while Bancroft is been given 9-month ban.

Australian fans and media are angry. They are upset. It was Smith’s name that has left the cricketing world in state of shock. There is a saying that the Australian cricket captain is considered to be the next most important personality in Australia after the Prime Minister. Smith’s impeccable batting had earned him the next to Don Bradman tag. No wonder, there is an outrage amongst the fans and media.

Where Warner has already started losing his sponsorship deals, Cricket Australia faced a major blow losing their naming rights partner for home games, Magellan. They have terminated the contract with CA after the verdict was announced.

Smith was already jeered by the South African fans at the airport while heading home. Ben Stokes saw it all after his street-brawl case last year. Faf du Plessis faced the backlash from Australian media while heading to the court for his hearing on the mintgate incident. For Smith and Warner, this is just the beginning.

Here is what the who s who from cricketing world had to say about the final verdict as well as the emotional press conference:

I don t like this! @steve_smith49 isn t a criminal!

Many think the Bans are harsh (Me Included) but the precedent has now been set by CA … They realised they had to send a message across the whole game … With what these players will lose out on I am sure the shock wave will do its job … Michael Vaughan (@MichaelVaughan) March 28, 2018

Cricket has been known as a gentleman’s game. It’s a game that I believe should be played in the purest form. Whatever has happened is unfortunate but the right decision has been taken to uphold the integrity of the game. Winning is important but the way you win is more important Sachin Tendulkar (@sachin_rt) March 28, 2018

YOH those bans are heavy. It s just, well, it s, WOW. That s life changing stuff. That shit at the airport looked totally unnecessary though Dale Steyn (@DaleSteyn62) March 28, 2018

Oi Oi Oi! It s not my business but it s done and dusted! I think 1 year is harsh! But to the 3 youngsters, y all gonna have to live with this – reflect quickly and know there s a lot of life ahead so don t stop here! Feel free to come see me in Jamaica anytime! #JustSaying Chris Gayle (@henrygayle) March 29, 2018

What happened in South Africa is incredibly sad on so many levels but what appears clear in my view is the punishment certainly doesn t fit the crime! Tom Moody (@TomMoodyCricket) March 28, 2018

I don t condone what these players did it s not the Australian way! Not sure if this is the right punishments, but these players will need accept it & learn from this. They are human & they have made a huge mistake. I hope they have the right people with them in this tough time

They have made a grave mistake but they are not bad people. As a coach, you feel for them as people. They are hurting. I feel for them and their families. These are young men and I hope people will give them a second chance. Their health and wellbeing is extremely important to us.

To hear that the Australian cricket team had been involved in premeditated cheating is something that is embarrassing. There is no way you can condone it. The win at all costs attitude in modern sport can make people do stupid things. I think Steve Smith was guilty of making a severe error of judgement. He was na ve and you can t condone what he did. He d be devastated.

We looked at our bowlers and said that maybe our bowlers weren’t as good as theirs in extracting reverse swing, but who knows? I’m not accusing anyone, I don’t think anyone is accusing the Aussies of doing anything in the Ashes. What happened in South Africa now with the Aussies, you can’t say that happened in the Ashes just because they’ve been done doing something silly over there.

Lehmann, for all the vitriol thrown at him on Twitter, is a decent, down-to-earth man. He treasures his job, always puts the players’ best interests at heart and is generally a happy-go-lucky, approachable chap. He surely would have talked Smith and Warner out of their ball-tampering plans if he had been consulted.

Personally I think the sanctions are a little bit harsh. I feel that those players should be banned for 12 months from international cricket. It’s an absolute privilege to represent Australia in Test match cricket, they’ve abused that with what they’ve done over the weekend but to take them out of first-class cricket in Australia isn’t beneficial for the game.

I must admit 12 months is a very harsh ban. 6 months I thought was right but clearly this reflects the uproar in Australia. It means they miss the India series and have little time to get ready for the World Cup

If they’d only given six months and they’d played in the Australian summer, the booing and crowd reaction would have been so bad and it would have been very hard for the players.

They will pay a heavy price financially and reputational but, in the end, they are trades people in the world of cricket and they need to be allowed to get back into the game.

Year-long bans for Steve Smith and David Warner are a little harsh. I feel a six-month suspension, hefty fine and being stripped of their captaincy roles would have been sufficient punishment.

Despite generational change, independent reviews and too many behavioural spot fires to list, Cricket Australia and the national team had demonstrated no real willingness or desire to improve the culture within their organisation from season to season. I have been bitterly disappointed watching the Australian cricket team over the last few years. The behaviour has been boorish and arrogant.

He s not a bad person by any means. They (Warner and Smith) have made a mistake, they have certainly admitted that and they are disappointed with that action so they will have to take that punishment, strong punishment that it is.

It is a serious matter (ball-tampering) and it should be dealt very seriously. Whatever has happened is not good for cricket. It is against the ethics and rule of the game. Using an object to change the condition of ball is not the right tactic.

This has given every team in the world a reality check. What kind of cricket do you want to play? It has probably given the ICC a lot more headaches and the opportunity now is for the governing bodies to show us, where is this line?

I feel like we ve lost sight of some of the principles in recent years there are some very good people representing Australia at the moment but the ball tampering issue isn t the first time the team as a collective has been in the headlines for the wrong reasons. The next few days, weeks and months will be difficult for Australian cricket.

An emotional Smith and Bancroft addressed the press after their arrival in Australia. Warner issued an apology through his Instagram account.

A livid Holding blasted out during his interview with Mumbai Mirror.

“They (public) are not overreacting. Whatever has happened till now is because of that press conference which should not have taken place. They are trying to limit the damage. As you rightly said, there have been past instances of players tampering with the ball without such a huge reaction. These teams in modern times travel with every help they could ever need. Where was the media manager, whoever that is? He/she should have taken over the situation and advised against the press conference. What was there to gain? He (she) shouldn t be continuing in that position. The media manager s job is not to just escort team members to their interviews and presentation ceremonies. But maybe I am wrong, and the advice was to not have the press conference and it was ignored.

That (Australian cricket) has been truly busted in the public eye, but I knew long time ago it was rubbish. I ve played for many years and commentated on many of their games. I have seen a former captain pick the ball from the ground and appeal, pretending he didn t know the ball bounced. All this hard and fair thing is absolutely rubbish. Not all of them behave that way but some go beyond pushing the envelope. They can tell other people (about their fair play) but don t come to me with that.”

“The video of Steve Smith being escorted at the airport and his most recent press conference resonated with me. The spirit of the game is of utmost importance there s no denying that. They made a mistake and they accepted it. It would be unfair of me to sit here and question the boards decision but they are great players and I don t think this should define them.”

While cricket needs to be corruption-free but feel sanctions on Aussies bit harsh. Are @stevesmith49 & @davidwarner31 paying for revolt for pay hike? History has it administrators deride those who standup for players cause. Classic case: Ian Chappell #BallTampering #StevenSmith

“It s unfortunate (ball tampering incident). But I feel the IPL is a big brand. It s such a big tournament with a lot of young players and seniors have been around for years. A couple of incidents that has happened outside the IPL should not affect it.” Faf du Plessis “It s been a crazy week. I have compassion for what he s going through. I think he s one of the good guys and he s just been caught in a bad place. I did send him a text. From a really deep place in my heart I feel for the guy. I don t want to see guys going through that stuff. It s going to be incredibly hard for him over the next days so I sent him a message of support, saying he ll get through this and he must be strong.”

Watching @stevesmith49 apologise and look broken is very sad. I m sure his fans will forgive him . No 1 test batsman he definetely is a lot better than this !! Hope u stay strong !! pic.twitter.com/z3AJ6Ycdwv

Veda became the first Indian Women cricketer to comment on the scandal. 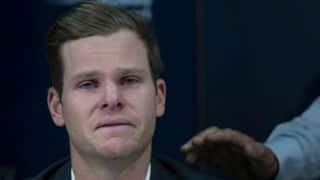 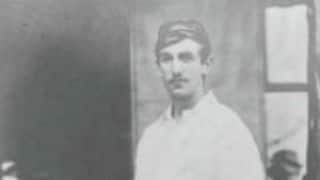 Lucius Gwynn: The Irish dual international who made way for Ranjitsinhji