Ban over and IPL duties done with, Steve Smith, David Warner back in Australia colours after 13 months for

Smith and Warner are expected to take part in this week's three warm-up matches against New Zealand, beginning on Monday.

Star batsmen Steve Smith and David Warner took part in their first training session with an Australia squad in more than 13 months on Sunday, as the team continued their World Cup preparations in Brisbane.

Recovering from a virus, Smith was seen for the first time at the World Cup camp, while Warner, who was seen on Friday jogging during the nets session, was also affected by a virus and missed Saturday’s practice, according to www.cricket.com.au.

Warner has been in fine form for Sunrisers Hyderabad in the ongoing Indian Premier League where the southpaw is still the tournament’s leading run-scorer, having piled on 692 runs after missing the 2018 edition of the tournament following the ball-tampering scandal.

Smith led Rajasthan Royals for a few games towards the end of his stay and showed glimpses of his class with the bat too, hitting three half-centuries and scoring 319 runs.

But Warner was the cynosure of all eyes as he hit a remarkable eight fifties and one century from 12 innings.

“You look at (Warner’s) stats over there (in India) and what he has done for Hyderabad, I think he has scored more than 500 runs every time he has been over there, which is amazing consistency,” allrounder Glenn Maxwell was quoted as saying by www.cricket.com.au.

“Hopefully, that continues with the one-day stuff for us.”

On their return, Maxwell said there has been no issue with their re-assimilation into the starting XI.

“I assume (they will play on Monday),” Maxwell said. “They have been sick the last couple of days so, hopefully, they are up and running.

It's business as usual for the Aussies with David Warner and Steve Smith back in the fold, says @Gmaxi_32 pic.twitter.com/CkQqpet4CZ

“And they are both superstars. I watched both of them go about it (in IPL) and they were both absolutely brilliant over there.

“There will be no worries about them coming back into the team.”

Smith and Warner are expected to take part in this week’s three warm-up matches against New Zealand, beginning on Monday.

🔊 Sound up! Steve Smith was straight into the action against Mitchell Starc and co at his first net session back in the Australian team. Oi yah! @alintaenergy pic.twitter.com/ReDlCzZOJx

Smith and Warner were banned from all forms of international cricket for one year after their roles in the ball tampering incident last year in the Cape Town Test against South Africa. Smith was leading the Australian team while Warner was his deputy. 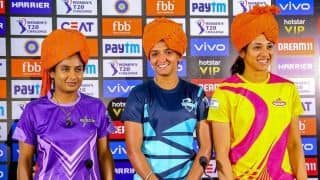