Bangladesh 127/2 against Zimbabwe at tea on Day 1

Bangladesh 127/2 against Zimbabwe at tea on Day 1

The only wicket they lost in this session was that of Mominul Haque who was dismissed for 35.

Bangladesh reached a total of 127 for the loss of two wickets at tea on Day 2 of the second Test against Zimbabwe at Khulna. The only wicket they lost in this session was that of Mominul Haque who was dismissed for 35 by Tinashe Panyangara.

Having started the post-lunch session on 62 for the loss of just one, Bangladesh lost their second wicket of the day as well as the innings when Mominul Haque, who was going brilliantly fell just 15 short of his half-century on 35. A short ball from Panyangara with an extra bounce went flat in the air after hitting the bat off Mominul who went to defend it forward and was comfortably collected by the bowler while the score read 78.

The next man who came on to the crease was Mahmudullah and was along with opener Tamim Iqbal who got to his half-century right on the last over before tea. The fifty came off 169 deliveries which is a long innings and proved that the Zimbabwean bowlers were hardly allowing the batsmen to play free-flowing. The batsmen too played sensibly without going for any big shots or taking undue risks.

Zimbabwe had a chance of getting another breakthrough in this session, however, they failed to take a proper review that could have earned them the wicket. While they went for a review on a decision that could have been close but it went against them. 49-run partnership has come up between Iqbal and Mahmudullah and it remains to be seen how strong does it grow after the strong partnership of 72 runs between Iqbal and Monimul. 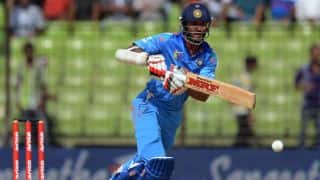 India vs Sri lanka 2014: Shikhar Dhawan says he has been given a role similar to that of Virender Sehwag 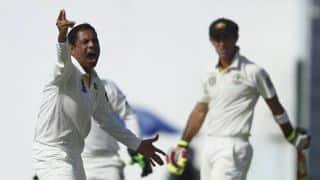