Iqbal and Mahmudullah put up a 95-run partnership stand for the third wicket.

Bangladesh were 193 for the loss of three wickets against Zimbabwe at stumps on Day 1 of the second test at Khulna. Tamim Iqbal was the star of the day by being the highest scorer of the day as he scored 74 off 250 balls.

Earlier during the day, Bangladesh skipper, Mushfiqur Rahim won the toss and decided to bat first. They started off with openers Iqbal and Shamsur Rahman who were off to a slow start with Rahman falling early at the score of six having been adjudged leg-before by Elton Chigumbura for just two. However, Mominul Haque, who came in at third down played a sensible innings of 35 runs to put up a 72 run partnership along with opener Iqbal at and after lunch only to fall to Tinashe Panyangara.

The post-lunch session saw Mahmudullah along with Iqbal play the session comfortably with the opener getting his half-century right in the last over before lunch. Zimbabwe had a couple of chance to go ahead with the ball only to find the decisions going against them when a review was unsuccessful. While there was one chance that could have been quite close for the visitors to earn them a wicket, however they failed to take the review. Bangladesh reached 127 for the loss of two at tea break.

The post-tea session saw another good stand between Iqbal and Mahmudullah with the latter getting his half-century as well and putting up a 95-run partnership stand for the third wicket with the opener. However, he failed to convert it to a big score falling for 56 to Panyangara. He was followed by all-rounder, Shakib Al Hasan who along with Iqbal are currently unbeaten on 13 and 74 respectively as the play came to a close on the first day.

Zimbabwe captain, Brendan Taylor made three changes in the team from the first match with debutant , Brian Chari coming in for Vusi Sibanda, Malcolm Waller for John Nyumbu and debutant, Natsai M’Shangwe for Tafadzwa Kamungozi. 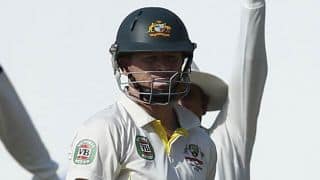