Nurul Hasan, Shuvagata Hom and Subhasis Roy all of whom were part of the ODI series against Sri Lanka last month have been dropped from 15-member squad.

Bangladesh announced their 15-member squad for ICC Champions Trophy 2017. They have recalled Shafiul Islam, who last played an ODI against England in 2016. Shafiul had not been available since due to a hamstring injury that he picked up during Bangladesh Premier League (BPL). Shafiul has claimed 63 wickets from 56 ODIs. At the same time, Nurul Hasan, Shuvagata Hom and Subhasis Roy all of whom were part of the ODI series against Sri Lanka last month have been dropped. However, Nurul and Subhasis are part of the preliminary squad for the practice match against Sussex from April 26 to May 6. These players will also play a triangular series in Ireland, a tournament that will also involve New Zealand. Australia planning Bangladesh tour for 3 Tests in late 2017

Shuvagata, however, will be missing out on all three contests. Chief selector Minhajul Abedin told ESPNCricinfo that his omission was due to English conditions requiring fewer spinners. Nurul and Subhasis, on the other hand, did not play the ODIs against Sri Lanka, though they had featured in the series in New Zealand. Another notable inclusion in the Ireland tri-series squad is Nasir Hossain, who last played for Bangladesh in October 2016. He came into prominence when he scored a century in the Dhaka Premier League (DPL).

Shakib Al Hasan and Mustafizur Rahman have both missed the initial matches of the ongoing IPL. Shakib joined the Kolkata Knight Riders (KKR) camp last week while Mustafizur joined Sunrisers Hyderabad (SRH) on April 7 after the Sri Lanka series. Shakib, yet to play a game for KKR this season, may have to return for national duties on May 4. Mustafizur is likely to join the Bangladesh camp by April 25 and his teammates in Sussex thereafter.

Bangladesh squad for Sussex camp and triangular series in Ireland: 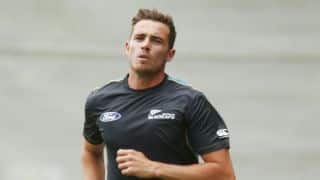