Bangladesh spinners took all 20 West Indies wickets to fall in the Chittagong game that ended Sunday with a 64-run victory for the hosts.

Bangladesh coach Steve Rhodes has defended the pitch used for the first Test against West Indies where his side won in three days, insisting foreign teams must expect hostile spin tracks in South Asia. Bangladesh spinners took all 20 West Indies wickets to fall in the Chittagong game that ended Sunday with a 64-run victory for the home side.

Rhodes strongly indicated that the Caribbean side should have foreseen a tough pitch after they used a pace-friendly track in Antigua when Bangladesh were skittled out for 43, their record low total.

“I think that’s the beauty of playing all around the world,” Rhodes said of the Chittagong track. “There’s lots of different ways to play this wonderful game and coming to Bangladesh and playing on spinning wickets it made for some intriguing cricket,” the Englishman added.

Bangladesh spinners also accounted for all 20 wickets when they beat England in a Test in Dhaka in 2016.

“I think in the subcontinent, in places like Pakistan, in Sri Lanka, in India, in Bangladesh you have come to expect turning wickets. So, it’s no surprise,” Rhodes said of the result. “There’s a Test match going on in Colombo at the moment, with Sri Lanka and England. That’s a turning wicket and I think the teams that come over to the subcontinent plan for those sort of wickets. It’s just a different type of cricket.”

Overall, 34 wickets fell to spinners in Chittagong, which equalled a record for a Test in Bangladesh set in a victory over Australia last year. Rhodes said there was nothing wrong with a home side taking advantage of the conditions. He cited the example of West Indies preparing a pitch for pace bowlers in July when his side were bowled out before lunch on the first day for 43.

“I’ll take you back to the Antigua Test match where we played on very alien conditions — green, bouncy, a swinging ball,” he said. 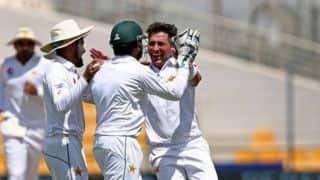 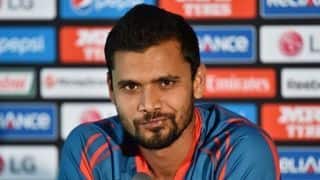 I always had the impulse for politics: Mashrafe Mortaza on contesting in parliamentary election