Tamim took a blow to his left wrist off the bowling of Suranga Lakmal, while batting during the Asia Cup opener against Sri Lanka on Saturday.

A fractured wrist has ruled Tamim Iqbal out of Asia Cup 2018, Bangladesh team manager Khaled Mahmud confirmed on Monday. The left-handed opener took a blow to his left wrist off the bowling of Suranga Lakmal, while batting during the Asia Cup opener against Sri Lanka on Saturday.

The 29-year-old is likely to be out of action for at least six weeks.

“He got two fractures in his hand. He would not be able to continue here and also for the next three to four weeks,” team manager Mahmud told AFP from Dubai.

Tamim had sustained an injury to his right hand s index finger during a fielding drill while Bangladesh s top two players Shakib Al Hasan and Mushfiqur Rahim are also not 100 per cent fit.

After being taken off the ground, Tamim returned to bat in the 47th over when Bangladesh has lost their ninth wicket in Mustafizur Rahman. With a heavily strapped wrist Tamim took guard, holding the bat with his right hand. He faced just one delivery and then left it for Rahim who had scored a century for a late blitz as he hammered 32 runs after Tamim s re-entry.

Tamim was disappointed his Asia Cup was coming to a premature end as he had high expectations from the tournament. “I had a lot of high hopes with the Asia Cup and I was overcome with emotions at that moment. I felt that if by playing this one ball the team can get five or 10 runs, it d help the team. I thought that if I had to play one ball, then why not? ” the opener had told ESPNcricinfo. 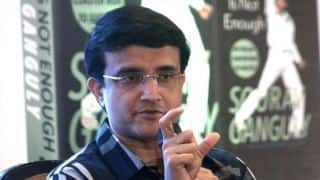