Bangladesh's Elias Sunny made a memorable seven-wicket debut against the West Indies in the rain-hit opening Test, which ended in a draw on the fifth and final day on Tuesday. 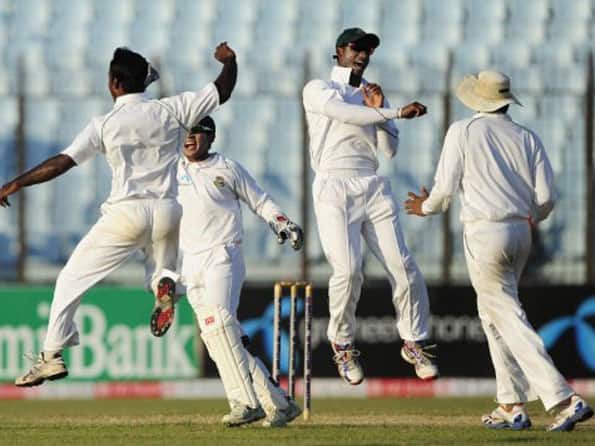 Bangladesh’s Elias Sunny made a memorable seven-wicket debut against the West Indies in the rain-hit opening Test, which ended in a draw on the fifth and final day on Tuesday.

Opener Lendl Simmons made a 49-ball 44, while Kirk Edwards (28 not out) and Darren Bravo (24 not out) were the unbeaten batsmen when play was called off with 15 overs remaining.

No play was possible due to rain on Saturday and Sunday. Sunny also became the third Bangladeshi to bag six wickets in an innings on debut in the morning session as the West Indies were bowled out for 244 in their first innings in reply to Bangladesh’s 350-9 declared.

The hosts declared their second innings closed at their tea total of 119-3, with left-handed Shahriar Nafees (50) scoring his sixth Test half-century with the help of eight fours.

Openers Imrul Kayes (13) and Tamim Iqbal (37) were the other batsmen dismissed in the second session.

The second and final Test starts in Dhaka on October 29.

The West Indies earlier added 100 runs in 17 overs to their overnight total of 144-5, with skipper Sammy smashing a brisk 43-ball 58 with the help of two sixes and eight fours for his maiden Test half-century.

Sunny, 25, took two of the five wickets to fall in the morning session while left-arm spinner Shakib Al Hasan took the last three wickets to finish with 3-53 off 18 overs.

Sunny, who took four wickets on Monday, struck in his second over when he had Samuels caught by Raqibul Hasan in the covers. Samuels could add just seven runs to his overnight score of 17.

Sammy and Carlton Baugh (30) then counter-attacked to add 60 runs in just seven overs for the seventh wicket before Sunny broke the stand when he bowled Baugh for his sixth victim.

The West Indies captain completed his half-century with a six off Sunny, but did not last long as he was bowled by Shakib after hitting the second six of his innings.

Shakib also dismissed Devendra Bishoo for no score in the same over. (AFP)

Mohsin Khan can continue as Pak coach if team is happy: Akram