An aggressive 77 from Nasir Hossain and a determined spell of bowling from Robiul Islam ensured that Bangladesh claimed the upper hand on day two of the second Test against Zimbabwe on Friday. 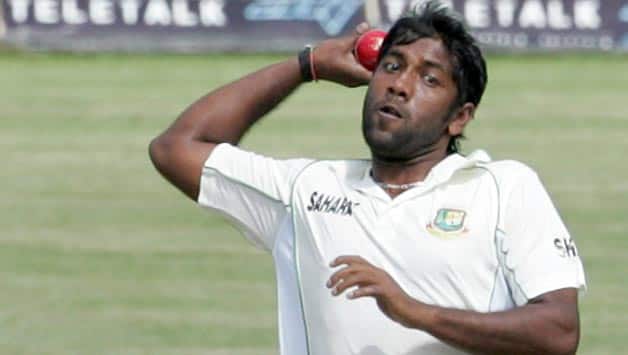 An aggressive 77 from Nasir Hossain and a determined spell of bowling from Robiul Islam ensured that Bangladesh claimed the upper hand on day two of the second Test against Zimbabwe on Friday.

Nasir’s entertaining knock stretched Bangladesh’s first innings to 391 all out in the morning session, before Robiul dismissed Zimbabwe’s openers in the afternoon as the home side slumped to 47 for three at the tea break.

Robiul charged in for 11 overs on the trot to record figures of 2 for 16, as he and his fellow seamers frustrated the Zimbabweans with some disciplined bowling.

Although Robiul was fortunate to have Regis Chakabva given out caught behind when the ball appeared to miss the bat, his dismissal of Vusi Sibanda looked less dubious and he went on to give Zimbabwe captain Brendan Taylor a proper working over.

Although Taylor survived an onslaught of short-pitched bowling from the fast man, Hamilton Masakadza was bowled in Shakib Al Hasan‘s first over after Robiul’s spell came to an end.

Once again the pressure was placed on Taylor, who reached the interval on six not out, with Malcolm Waller for company.

Bangladesh owed a credit to Nasir for his batting heroics earlier on, given that he led a crucial counter-attack after arriving at the crease on Thursday evening with the tourists on 248 for seven and the second new ball just six overs away.

Ziaur Rahman was trapped lbw in just the fourth over of day two after Bangladesh resumed on 300 for six but Nasir shared a 51-run stand with Sohag Gazi for the eighth wicket.

Both batsmen were eventually dismissed by leg spinner Graeme Cremer, with Nasir bowled around his legs at the end of his 103-ball knock.

Robiul picked up where Nasir left off with an unbeaten 24 that included two fours and two sixes, as the number 11 batsman added a final insult to Zimbabwe’s bowlers, who had Bangladesh struggling at 125 for four at one stage on day one.