Credit must be given to the Kiwi quicks as they have stuck to their plan and executed it in an apt manner .

Bangladesh are scattered as they have reached a total of 100 for 5 at the end of the second session against New Zealand on Day Four in Christchurch. The Tigers are leading the hosts by 35 and are dwelling in the shadows of losing yet another game after their debacle in the first Test. The visitors have Nazmul Hossain Shanto on 10 while Sabbir Rahman s (0) dismissal was the last ball before tea was taken. From the Kiwi pace attack, Neil Wagner has taken and Tim Southee have taken 2 wickets each while Colin de Grandhomme has taken 1. New Zealand bowlers have been spot on in their spells along with some excellent fielding effort which they lacked in the first innings.

Bangladesh resumed their batting from the score of 20 for 1 with Soumya Sarkar and Mahmudullah at the crease. Both these batsmen tried their best to stay away from the short deliveries and deliveries going away from the off stump. They did display gritty batting and scored 41 runs for the second wicket but their persistence was ended by de Grandhomme. He peppered Soumya with short deliveries outside off which the batsmen tried to hammer with horizontal bat past gully, but Jeet Raval got hold of a beauty of a catch to break this partnership.

Shakib Al Hasan (8) who walked in at No. 4 never looked settled in his short stay. Again the Kiwi quicks used the same short ball technique and fell in the bait giving an easy catch to de Grandhomme off Tim Southee s bowling. This wicket was also Southee s 200th Test wicket after Sir Richard Hadlee, Daniel Vettori, Chris Martin and Chris Cairns. Mahmudullah (38) soon joined the rest in the dressing room after his timbers were disturbed by Wagner. He tried to drive the ball but the ball moved inside and took his bails on the way.

It looked that the visitors would go for tea with 4 wickets down, but they proved everyone wrong again with Sabbir playing a loose shot to give away his wicket as the short ball did trick yet once again. Bangladesh are on their way cruising to a defeat which looked nowhere near at the start of the second session.

Credit must be given to the Kiwi quicks as they have stuck to their plan and executed it in an apt manner . Their inexperience and temperament is the problem here and hence in this precarious situation. With 5 wickets already down and a lead of mere 35, Bangladesh are most likely walking towards a defeat. 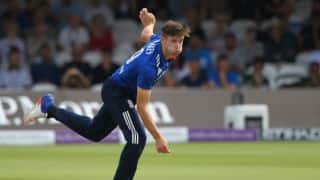