Bangladesh in talks with Gary Kirsten for consultant's post

Bangladesh in talks with Gary Kirsten for consultant's post

Coach Chandika Hathurusinghe's sudden departure has affected Bangladesh cricket and Bangladesh Cricket Board (BCB) admitted it, revealing that they are in talks with Gary Kirsten for an elaborate role as consultant.

Coach Chandika Hathurusingha‘s sudden departure has affected Bangladesh cricket and Bangladesh Cricket Board (BCB) admitted it, revealing that they are in talks with Gary Kirsten for an elaborate role as consultant. Kirsten, who coached India to their World Cup title in 2011, is currently associated with BBL as well as IPL, and has hence turned down the offer of becoming Bangladesh’s head coach. However, he is learnt to be interested in the consultant’s role.

“We are on the back foot, that’s for sure,” BCB president Nazmul Hassan told ESPNCricinfo: “Hathurusingha’s departure has been a blow. You can’t just take any coach, but someone who fits our environment and mentality. Bangladesh has reached a level which requires us to be thoughtful about bringing a quality coach. Not much chance of a trial and error; we cannot change much in our team. We are not in any hurry.”

About signing Kirsten, Hassan said, “We were talking to Gary Kirsten for a consultant’s role. He would help us figure out what coach to hire for our national team, high-performance side and the Under-19s. He is booked up to February, in the Big Bash. He is involved with the IPL and Big Bash, which is why he is not interested to be the head coach. If we permitted him to work in those leagues, then he may have agreed with us. But we can’t let our head coach go like that, which is what we have decided.”

BCB will soon reveal who takes up the role that is being competed between Kirsten, Neil McKenzie, Grant Flower and Hashan Tillakaratne. “We are very close to announcing someone as a batting consultant. We wanted someone full-time but the person we’ve chosen is of a higher level. He said we don’t need a full-time batting consultant. He has said he will be here ahead of every series and when there are long breaks,” Hassan concluded. 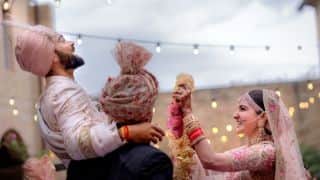 Virat Kohli does not respect India: BJP MLA criticises captain for getting married in Italy